As the Museum of the Big Bend settles into its new quarters in Lawrence Hall, we are provided the opportunity to examine some of the objects in the collections

which have been part of permanent exhibits in the old museum facility, and some “buried treasures” from museum collections which have not been displayed before. In this issue of La Vista de la Frontera, we take a look at four painted pebbles from a rockshelter in a tributary canyon to the Pecos River in Val Verde County, Texas.

The pebbles are part of the McNutt Collection, which was donated to the museum on July 1, 1930, by E. F. McNutt and Guy Skiles of Langtry, Texas. McNutt also donated a large quantity of aboriginal artifacts to the Witte Museum in San Antonio, Texas, at about the same time. These particular pebbles have been on display in the Museum of the Big Bend since 1969. The specific site from which these pebbles came is unknown at this time.

Painted Pebbles in the Lower Pecos
The Lower Pecos archeological region of Texas and northern Mexico extends roughly 50 miles to the west, north, and east of the confluence of the Pecos River with the Rio Grande. The extent of the region south into Mexico has not been determined, but sites with clear affiliation have been reported as far as 90 miles into Coahuila at Arroyo de la Babia to the southwest of the Serranías del Burro (Turpin 1991; see map). This rough boundary is based on the occurrence of Pecos River Style pictographs, which are large polychrome wall paintings depicting stylized human and animal figures, as well as abstract geometric motifs (see Kirkland and Newcomb 1967; available at the Museum’s gift shop).

Painted pebbles are a common artifact in the Lower Pecos, and have been found throughout the entire chronological sequence, from as early as ca. 8500 b.p. to ca. 600 b.p.; even at less well-protected sites such as Arenosa Shelter (Dibble 1967) and open sites like the Devil’s Mouth Site (Johnson 1962).

They have been less frequently reported in the Big Bend, but this may be due more to the lack of scientific excavation than to actual absence of the artifacts from the material culture. Coffin (1932:Plate IX) illustrates five painted pebbles from a large rockshelter in Bee Cave Canyon in the Chalk Mountains in southern Brewster County. These pebbles are similar to pebbles from the Lower Pecos, but the extent of the relationship between the Lower Pecos and the Big Bend remains uncertain.

The function of painted pebbles is not known. They may have served as visual props for storytelling, as markers for divination or other rituals, or for some other purpose entirely. At least one researcher has argued that they might be associated with menstrual taboo (Shafer 1986:167).

They have frequently been found in trash heaps (middens), sometimes with edge-bashing indicating that they were used as hammerstones in stone tool manufacture. This suggests that if they were involved with sacred rituals that they might have lost their sacredness after use, or perhaps after the person with whom they were associated had died. They have not, however, been found in burials, and all of these possible uses are only speculations.

In the 1960s Mark Parsons, then a student at the University of Texas at Austin, worked out a stylistic typology of painted pebbles from several sites in the Lower Pecos. Parsons has not had the opportunity to present his findings in detail, and archeological evidence to tie his styles to the chronological sequence has been slow in coming. The pebbles in the museum collection do fall within the range of characteristics described by Parsons (see below), but assigning a date to these artifacts is not really possible at this time.

Description of the Painted Pebbles
The pebbles in the collection are numbered 1381 to 1384 (see photo). They are all limestone, and are smooth, presumably having been collected from a stream bed before being painted, but this is not certain. All designs are in black; specimens 1381 and 1383 have a red stain on one edge which may be very faded paint or a natural discoloration of the stone. The black design is superimposed upon the red in each case. 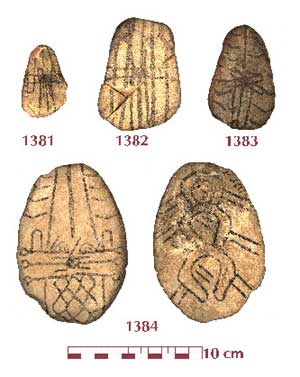 The designs are mostly typical of Parsons’ Style 2 (1381, 1383, and 1384), in which the central motif is circular or rectangular with linear or spatulate elements radiating out from it (Parsons 1986:181). Style 2 generally has one to three lines bisecting the stone along the long axis, flanked by crescent-shaped lines perpendicular to the long axis.

Specimen 1382 also falls into this range, but the curved elements at the top (as illustrated) of the stone may qualify as the “chevrons” that distinguish Style 3 from Style 2. Interestingly, these very stones may have been part of Parsons’ original research sample, as specimen 1384, or its twin, is illustrated in a line drawing as an example of his Style 2 (Parsons 1986:182). Parsons does not list the provenience of his examples, however, and the museum has no official record of him studying these (Karen Green, personal communication).

Summary
The painted pebbles in the McNutt Collection of the Museum of the Big Bend are remains of a cultural tradition that spanned thousands of years in southwest Texas and northern Mexico. Further research may reveal examples of a similar tradition in the Big Bend region, which has been scrutinized less carefully than the Lower Pecos. As the Center for Big Bend Studies continues to sponsor historical and archeological studies in the Big Bend, the nature of prehistoric cultures in the Big Bend will be better understood.

1967 – Excavations at Arenosa Shelter, 1965-66. Report submitted to the National Park Service by the Texas Archeological Salvage Project, The University of Texas at Austin.

1938 – Picture-Writing of Texas Indians. The University of Texas Publication No. 3809, Austin.

1962 – The Archeology of the Devil’s Mouth Site, Amistad Reservoir, Texas. Report submitted to the National Park Service by the University of Texas at Austin.

1933 – A Prehistoric Rock Shelter in Val Verde County, Texas. Bulletin No. 3327. The University of Texas, Austin.