Did U.S. Cavalry massacre civilians on the border?

When the shooting ended on the moonlit night of Jan. 28, 1918, the crumpled bodies of 15 unarmed Mexican boys and men between the ages of 16 and 72 lay scattered in the brush downriver from Porvenir.

After the killers rode off in the darkness, the panicked women, children and other survivors fled across the Rio Grande. The next morning, an old woman came from Mexico with a horse cart to retrieve the bodies.

Days later, the cavalry soldiers returned to the remote Texas border hamlet — which was home to 140 people — to knock down and burn the abandoned dwellings.

“The quiet little village of Porvenir with its peaceful farms and happy homes was no more. The Rangers and four cow-men made 42 orphans that night,” was the bitter summary of Henry Warren, the local schoolmaster, whose father-in-law, Tiburcio Jáquez, died in the massacre.

While the dogged efforts of Warren and others to find justice for those slain ultimately proved futile, the ghosts of Porvenir have refused to fade quietly into history.

Recent archaeological work, including analysis of slugs and shell casings found at the scene of the executions, is turning the long-accepted historical narrative of the event on its head.

The Texas Rangers had maintained they were fired upon from the darkness when they approached the village, and shot in self-defense. The U.S. Cavalry claimed it didn’t kill anyone, but instead found the victims’ bodies the morning after while on patrol.

“Artifacts on the ground where the massacre is believed to have taken place suggest that both the military and civilians participated. The .45 long Colts were typically used by civilians and Rangers. The .30-06 weapons were typically carried by the cavalry,” said David Keller, an Alpine-based archaeologist, who has made several visits to Porvenir.

In November, Keller led a team of four archaeologists on a three-day scientific dig at Porvenir. They were joined by photographers, documentary filmmakers, a historian and others.

“The majority of the artifactal evidence we found is military, which is not what we should have found there according to the prevailing story, that the crime was committed by the Texas Rangers and local vigilantes,” Keller said.

The bullets and cartridge casings they recovered, plus others found years earlier, later were turned over to battlefield archaeologist Douglas D. Scott, best known for his work analyzing the Little Bighorn Battlefield, site of Custer’s last stand.

This week, Scott, also a firearms expert, released his findings on the ballistic evidence.

“We can’t definitely say it’s human, but considering the context, it’s likely a bullet that was used to shoot a person,” Keller said.

He said the new findings “cast significant doubt” on claims that the military was not directly involved in the massacre.

About a half-dozen heavily armed Texas Rangers, local cattlemen and U.S. Cavalry troops came to Porvenir that fateful night. The impetus for their visit was a murderous bandit attack on the Brite Ranch a month earlier on Christmas Day.

But according to Warren, the local schoolmaster, blaming those in Porvenir for the raid was a convenient fiction.

“The truth is the Mexicans were at Porvenir Xmas day, 1917, and Brite’s Ranch was 40 miles away, and there was no road, not even a trail between the two places,” he wrote in his contemporary account. 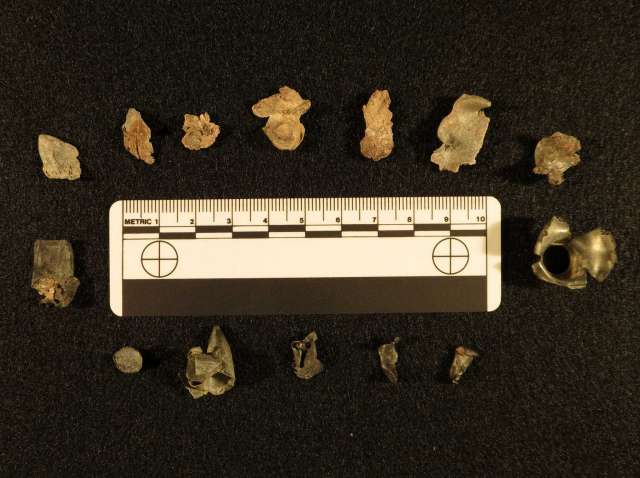 The Porvenir massacre was one of many deadly episodes involving residents of Mexican ancestry during the decade of the Mexican Revolution, which brought waves of violence and raiding along the U.S.-Mexico border.

The bloody incident now is featured in an exhibit called “Life and Death on the Border: 1910 to 1920” at the Bullock Museum in Austin. It examines the often violent measures used by vigilantes and American authorities.

“That decade saw a spike in Mexican killings by a bunch of law enforcement and people associated with them. It became an accepted idea that killing Mexicans was OK,” said Trinidad Gonzales, a history professor at South Texas College in McAllen.

“The thing about the Porvenir massacre is that it created an international incident. The Mexican government started asking the U.S. State Department was what occurring,” said Gonzales, one of the scholars who conceived the exhibit.

In addition to protesting through official channels, Mexico also held a court of inquiry in Ojinaga and took testimony from Porvenir survivors, transcripts of which were included in the Canales investigation.

A few Texas Rangers ultimately were fired or resigned over their actions in Porvenir, but no one was criminally charged. The cavalry largely avoided culpability.

The version of the massacre still found in the “The Handbook of Texas,” the official history of the state, cites sources who said “the Mexicans” were responsible for the violence.

One source accused Porvenir of being home to “thieves, informers, spies and murderers.”

The handbook also cites others, including Warren, who blamed the Rangers in the “wholesale destruction of these Mexicans.”

“The role of the United States Cavalry is unclear,” to the handbook citation notes, adding only: “Press reports at the time stated that the Army had nothing to do with the affair.”

Historian and author Glenn Justice, 67, who has spent three decades studying the killings and found the site of the shootings 15 years ago with help of a survivor, is leading the push for a re-examination.

“I haven’t found any bandits or outlaws in Porvenir, or any evidence they had anything to do with the Brite Ranch raid. I have yet to find that they were anything but simple farmers and people trying to escape the war in Mexico,” he said.

Only a couple of old guns — but no horses from the Brite Ranch or goods proven stolen from its general store — were discovered in the house-to-house search of Porvenir, he said.

“You have to consider there was a civil war going on in Chihuahua, the Mexican Revolution in which more than a million people died or disappeared. A lot of American ranchers along the border had to abandon their homes because of the violence,” he said.

Border residents likely also knew about the “Plan of San Diego,” a revolutionary manifesto that called for the violent liberation of the Southwest from U.S. control, including the deaths of all white males over 16.

Locally, there were shocking raids by Mexican revolutionary forces or bandits at Boquillas, Glenn Springs, the Brite Ranch and elsewhere in Presidio County, which spread fear among West Texas residents, fueling an impulse to strike back.

A helicopter provides a birds-eye view of the site for the film crew shooting a documentary about the massacre. Behind them, the Mesozoic-aged Sierra Pilares in Mexico create a dramatic backdrop for the project.
Photo: Jessica Lutz

At the time, Justice said, there also were numerous cattle thefts in West Texas, and a booming and illicit cross-border trade in which stolen Mexican cattle were exchanged for U.S. armaments.

“You could trade five rounds for a cow,” he said.

Justice puts the Porvenir raid — coming a month after the attack by armed horsemen on the Brite Ranch — into this general context, an ill-focused, punitive attempt at reprisal and deterrence.

“I think the reason it happened is they wanted to make an example of the people in Porvenir, and this happened in a number of cases. I feel there were as many as several hundred Mexicans killed on both sides of the Rio Grande by the U.S. Army and the Rangers in the Upper Big Bend,” he said.

While he cannot condone the deadly Porvenir raid, he said he can see how it happened.

“Just try to have an appreciation for both sides of this. I’ve lived on the border long enough, and I understand why they did it. They were trying to defend ranchers and innocents when there was a war going on across the river,” he added.