The Logan’s Terrace (41TE676) site—located near the Pecos River on the Nature Conservancy’s Independence Creek Preserve—was tested in 2010 with several excavation units. Large mammal bones had previously been discovered eroding from several localities along a cut bank and subsequent analysis had identified these as bison bones. Since bison remains have been very sparingly found in the eastern Trans-Pecos, in either archaeological or natural contexts (with the notable exception of several bison “jumps” at Bonfire Shelter near Langtry, Texas), the discovery of these eroding bones offered an opportunity for research of this subject. Our initial findings suggest the remains are Archaic-aged, although this has not yet been confirmed through radiocarbon analysis or other means. However, we were able to uncover several lines of evidence to suggest that both sets of remains were by-products of human activities. The presence of loosely associated cultural debris (burned rocks and chipped stone) above and just below the bone outcrops and an apparent green fracture (a bone break that is often the result of human actions) in a specimen recovered from one of the localities offer such suggestive evidence. Subsequent testing of other portions of the terrace in 2011 confirm the presence of deeply buried features and archaeological deposits that may represent Middle or even Early Archaic occupations. CBBS continues to work with the Nature Conservancy to document the Logan’s Terrace site and other cultural resources at the Independence Creek Preserve. 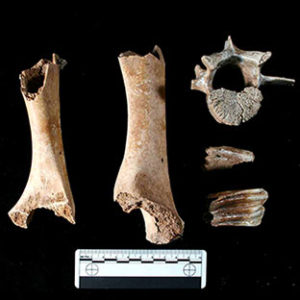 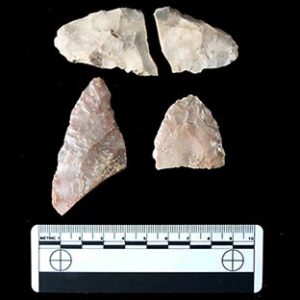 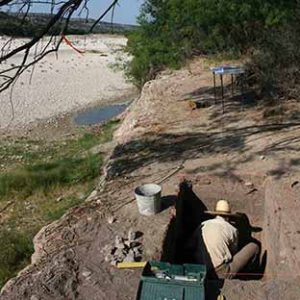