The Birthday site was discovered in 2009 at the edge of the ecotone separating the lowland desert and lowest foothills of the Davis Mountains. In settings such as this, diverse floral and faunal communities occur in tandem with concentrated archaeological sites. Three separate thermal features exposed in erosional cuts across the site yielded three different Early Archaic dates—ca. 5130 B.C.; ca. 4850 B.C..; and ca. 4620 B.C. Excavation of a series of backhoe trenches provided supplementary data concerning the horizontal and vertical extent of these occupations. Of particular interest were the deposits associated with the thermal feature dating to ca. 4850 B.C.. Here, a thick (ca. 10-15 cm) zone of charcoal and ashy deposits was exposed. A block excavation was initiated in this area in the latter part of 2009 to explore the apparent living surface associated with this feature. Additionally, an organic zone about 80 cm below this cultural zone (possibly the remnants of a natural prairie fire—and below sediments from completely different depositional events—was radiocarbon dated to ca. 5650 B.C. These diverse data, along with TAP-generated geomorphological data from other Early Archaic sites, are helping us understand Early Archaic climatic fluctuations in the region.

In 2010, CBBS completed a block excavation at the Birthday site that began in 2009. This investigation resulted in the controlled excavation of 17 square meters of soil and the recovery of several bifaces, one piece of groundstone, a number of small burned bone fragments, and hundreds of pieces of chipped stone. Three separate features were exposed: two small basin-shaped hearths and the possible remains of a dismantled and eroded earth oven. The latter feature’s size and shape, and the quantity of associated burned rock and charcoal, are suggestive of an earth oven (i.e., a specific food processing feature that used substantial amounts of rock as heating elements in order to slow cook desert succulents beneath the ground). This is particularly noteworthy because previously the earliest documented feature of this type in the region dated to the subsequent Middle Archaic period. This investigation is discussed in the 2010 CBBS newsletter and an article is in preparation. 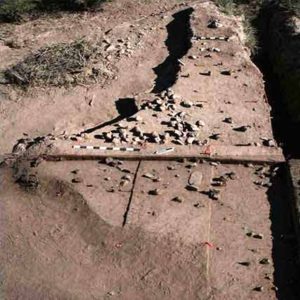 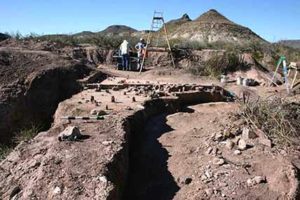 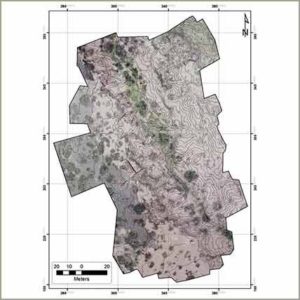