On the Trail with Apache Adams 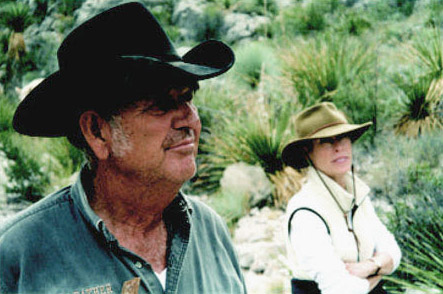 People come from far and wide to experience the Big Bend. The spellbinding desert mountain scenery, the wide vistas and deep canyon gorges, and the majestic mountain “islands” in the basin “seas,” all tend to build in the bloodstream, drawing visitors back again and again until many begin to feel as if they are one with the place.

A few become Big Bend experts in their own right-learning all they can about the flora and fauna, the geology and archeology, the history and dynamics of modern communities, and even desert survival techniques. Some who seem to have transcended visitor status go so far as to write books about the region, give lectures, and lead tours. Thus, some do in fact become desert scholars and deserve applause for their vigorous efforts to disseminate information about this extraordinary part of the world.

But there is another, quieter breed of expert in the Big Bend. This loose-knit fraternity of individuals-comprised of those who have lived much or all of their lives dealing with the desert on a day to day basis-have a special kind of intuitive knowledge that can only be gleaned superficially by the inquisitive scholar. Mr. Apache Adams is one such expert-a man who has, of necessity, lived and breathed the essence of desert life.

I recently had the good fortune to spend some “horse” time with Adams, an opportunity made possible through the gracious efforts of Mr. Jeff Fort, owner of Pinto Canyon Ranch-himself a veteran horseman, explorer, and longtime devotee of Big Bend history and prehistory. Fort had learned through various sources that Adams was possibly the last in a line of desert inhabitants who knew where a number of historic nineteenth- and early-twentieth-century horse trails could still be traced in rugged areas of the southern Dead Horse Mountains.

Our plan was simple enough-to follow Apache on horseback and record the locations of the trails with geographic positioning systems (GPS). We could then transfer that data to topographic maps in the CBBS laboratory.

Having made the necessary preparations, we headed for our staging ground at Adams Ranch headquarters in southern Brewster County, arriving there on the evening of November 15, 2003. Our party consisted of Apache and his grandson, Dustin Roller, Apache’s longtime sidekick and Big Bender, Mr. James Ivey, Jeff and his wife Ms. Marion Barthelme, Mr. James King of the Texas Nature Conservancy, Mr. Marcos Paredes of Big Bend National Park, and yours truly. Marcos carries out frequent horseback patrols in Big Bend National Park. Marion had just returned from an extended horseback trip through Mongolia! In fact, as I was to quickly learn, I was the only one in the group who had not grown up on the back of a horse-a twist of fate for which I would pay dearly over the next 24 hours.

After an evening of sharing stories we were saddled and ready to head out shortly after daybreak. The first leg of this journey, as it turned out, was to last all day and late into the evening. Heading southwest from Adams Ranch, our party crossed Brushy Draw and then, after several miles, began following its major western tributary, Telephone Canyon, into the far eastern and most remote area of Big Bend National Park. In the vicinity of Hubert Ridge in the park, Apache led us onto a barely visible trail that headed to the south towards the river.

As the horses carefully picked their way along the trail, with Apache cranking out story after story, I juggled the reins along with topographic maps, camera, a GPS unit, and a pocket notebook trying to get as much information onto paper as possible. I was wondering how Apache could make out the trail at all, and in retrospect, my horse was surely wondering what in the world I was doing back there.

It turns out that we were following a route up Telephone Canyon used by the U.S. military during the Mexican Revolution. Finally recognizing the need by 1916 for a more assertive policy against Mexican intruders, both real and imagined, the American military had begun to expand its presence along the border. In fact, Telephone Canyon received its name from military efforts to improve communication in this very remote area of the Rio Grande. Ron Tyler, in his history of the Big Bend (1975:175) notes that Company I of the Fourth Texas Infantry “…spent most of their time stringing telephone wire through the Sierra del Carmen and Boquillas Canyon to Boquillas, Texas, thus eliminating one of the greatest problems in the Big Bend-slow communication.”

After a short side trip down the secondary trail, we returned to the main trail in Telephone Canyon and continued upstream along Heath Creek. Reaching the confluence with North Telephone Canyon, we explored a good distance up that tributary along another secondary trail, with steep limestone slopes looming on both sides of the draw, then returned once again to the trail in the main canyon, again turning upstream. One could imagine the frustration of Company I soldiers-relegated to stringing mile after mile of telephone line in these isolated canyons without any sign of military action for which they had been trained. 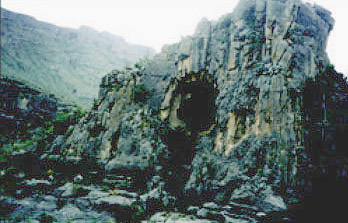 Another couple of miles up Telephone Canyon brought us to a place of special significance for Apache. On a limestone bluff above the canyon floor was a large rockshelter that for two years had served as a home to his mother and father when they first came to the Big Bend in the late 1920s. Told to us in a rather matter-of-fact fashion by Apache, there was a moment of group silence as we tried to mentally process what he was saying. As an archeologist who has visited hundreds of prehistoric rockshelters during my career, my mind was immediately flooded by visions of what the Adams rockshelter must have looked like-with no electricity or running water, makeshift furniture, and clothes hung out to dry in the wind-as compared with a prehistoric Indian family. I found my own thoughts to be rather humbling, and I suspect that others in the group reacted similarly.

We continued far up Telephone Canyon to the vicinity of “Strawhouse Trail,” another barely discernible but historically significant military route leading southward between rugged mountains toward Boquillas on the Rio Grande. I wondered if these same trails had earlier Indian origins, and decided that some of them probably did. By this time we had been on various trails for some 15 miles and the day had progressed significantly. It was time to turn back! Stopping only to examine a prehistoric rockshelter along the way, we covered the 12 or 13 additional miles back to camp-arriving at dark. By now my backside was complaining in no uncertain terms. 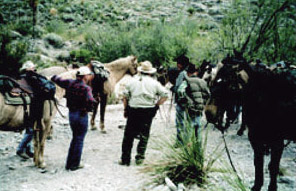 Only I could fathom the sheer determination that it took for me to get back on that horse the following morning. No one else seemed the worse for wear-including my horse-so I kept my painful moans to a low murmur that only he could hear. Apache had told us about a historic ruin on the Rio Grande a few miles to the south of Adams Ranch, approachable only by horseback since rains had washed out the roads.

We meandered southward across arroyos and ancient ridges, finally arriving at a prominent point where both sides of the river were clearly in view. Here stood the remains of a large stone-based corral and several other stone structures. At the base of the slope below the corral were remnants of numerous structures that had been excavated and constructed into the slope itself, indicating a substantial, if temporary, occupation of the site.

While this significant historic site is apparently related to the Mexican Revolution period, its identification remains somewhat of a mystery. It seems likely, based on information obtained from the Archives of the Big Bend (SRSU), that this was the site of Camp Mercer, which was established in 1916 by the Fourth Texas Infantry. 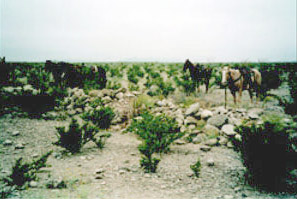 However, in the historical records Camp Mercer is referred to as being at Stillwell Crossing, which lies over 2 miles downstream. Jodie Harris, an infantryman who served with Company I of the Fourth Infantry in 1916, created a wonderful series of cartoons on camp life along the border that made references to Camp Mercer (Raun 1994). Unfortunately little is known about this important historic site, and it is not included among the numerous military establishments described in the New Handbook of Texas

Arriving back at Adams Ranch headquarters around noon, we prepared to draw the trip to a successful closure. Apache\’92s stories of life on the ranch were crowding my thoughts as I added some notes to my field book. Among many other things, he had discussed what it was like to run up to 500 mares at one time on the ranch, how it took two days to herd cattle to Marathon, what it was like to work in a candelilla wax camp before World War II-even how he had been christened “Apache” by his parents when he was born into this world with long, black hair. As we said our so-longs, I was mindful of my good fortune to have spent two days in the saddle with a preeminent Big Bend expert.

1994 – The National Guard on the Border and One Soldier’s Viewpoint.
Journal of Big Bend Studies

1975 – The Big Bend: A History of the Last Texas Frontier. National Park Service, U.S. Department of the Interior, Washington, D.C.