The interview lasts 7 minutes and 45 seconds and is a 3.08 MB download.

It is – to put it mildly – a fraught history. Thousands of Native American burials were exhumed in the 19th and 20th centuries, by white scientists and collectors – the human remains displayed in “bone rooms,” or used in now-discredited studies aimed at proving the inferiority of Native people. The violations have extended to the living – modern researchers have used tribal blood samples for unauthorized DNA research. It’s not surprising many Indigenous communities resist genetic research – the Navajo Nation has banned DNA studies.

But could something positive be salvaged from this ugly history? And could DNA research be a tool for respecting, rather than exploiting or objectifying, Native peoples?

Scientists have recently analyzed DNA from two prehistoric West Texas burials – remains that, decades ago, were unearthed from their resting places and carried off by artifact hunters. The findings are potent – and could fundamentally alter perspectives on the peoples of the Big Bend – of the past, and the present.

“I thought we’d find some really interesting artifacts,” Schroeder said, “and honestly, that’s what I was really interested in. I didn’t think we’d find human individuals. But it became readily apparent that there were burials that came out of the cave. That became priority number one for me – where are these individuals? And that led on a pretty sordid adventure.”

Spirit Eye Cave, in southern Presidio County, was, in the 1950s and 60s, a “pay-to-dig” site. Collectors paid a small fee to dig the cave – which Native peoples occupied for thousands of years – and could keep what they found. 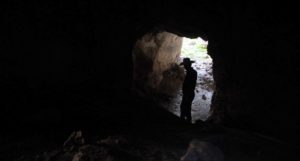 The view looking out the lowere entrance of Spirit Eye Cave, in southern Presidio County. In the 1950s and 60s, the cave – which Native people occupied for thousands of years – was a “pay-to-dig” site, and among the things collectors carried off were human remains. Recent DNA analysis of two of those bodies could alter perspectives on Big Bend peoples – of the past, and present.

Schroeder set out on a search for those collectors – hoping to analyze artifacts. Then he found himself tracking bodies.

Collectors, he learned, had removed at least three bodies from Spirit Eye. Some knew they’d crossed a line, and appealed to professional archeologists for guidance. Those appeals went unanswered.

One body was displayed in hotel lobbies in Marfa. A second was exhibited at a small private museum until the late 80s. The third, Schroeder learned, entered the black market. That body was later recovered by game wardens in California, when they busted a man there for illegal animal trafficking. The remains were transferred to the Texas Archeological Research Laboratory, at UT-Austin.

Texas is unusual in having no law against owning human remains. But the Native American Graves Protection and Repatriation Act requires federal agencies, and institutions that receive federal funding, to return Native American human remains to lineal descendants and culturally affiliated tribes. The UT museum followed the law’s procedures – but no tribal group claimed the Spirit Eye body.

Schroeder thought DNA analysis could help in understanding Big Bend’s prehistory, and in identifying descendants. UT allowed him to collect a sample for DNA testing – as did one of the two private holders of Spirit Eye burials.

“Bryon has a connection here at University of Montana,” Snow said, “and he actually kind of cold-emailed me, saying ‘Hey, I’ve got some samples,’ with this very unique situation, where it’s basically trying to get individuals back to where they belong. I was very interested.”

Snow heads a molecular anthropology laboratory that specializes in ancient DNA. From the two burials, she sampled 35 micrograms each – about the size of a pencil eraser, she said.

“Because you have to do all the steps of authenticating that it’s ancient DNA, not modern DNA – that, in itself, is computationally demanding,” Blohm said. “The software takes the DNA you have, and it tries to map it to modern pieces of DNA and older ones, to filter out where it belongs and to recognize damage, that happens from it degrading. It’s a lot of work.”

Ultimately, Snow and Blohm succeeded in sequencing the “mitogenomes” of these two people buried in Spirit Eye.

The results were arresting.

The burials were not contemporaneous. The oldest – though to be a man – was buried between 920 and 800 years ago. The second – likely a woman, whose grave was capped with a metate – dated to between 765 and 680 years ago. The two were closely related – the second very possibly a direct descendant of the first.

Their DNA “haplotype” was a rare one: B2a4a1. The same genetic signature has been found at Paquime, the ancient urban center in what’s now Chihuahua. It’s present among contemporary Indigenous communities in Chihuahua, Durango and the Sierra Madre Occidental.

Yet close relations of those buried at Spirit Eye are to be found even nearer at hand.

Just before he received Snow’s results, Schroeder was visiting in his Alpine office with a current Big Bend resident. The man had researched his ancestry – and knew his haplotype: B2a4a1.

The moment Schroeder told his visitor about the Spirit Eye findings was an emotional one. The man’s family traditions had insisted on Indigenous roots.

“For him, it was affirmation of things that he had suspected for a long time,” Schroeder said. “I thought that was pretty freaking powerful – he was literally moved to tears. All of a sudden it was like, ‘I knew this. I’d always kind of known it, but now I really know it.’”

Even more than the U.S. at large, the early Texas attitude towards Native Americans was extreme: leave or die, essentially. It’s no coincidence there are three reservations in Texas, and scores in adjacent states. That attitude lingers, Schroeder said, in a tendency to dismiss the Native presence here, in the past, and the present.

Yet the man in Schroeder’s office is certainly not alone. The DNA findings confirm that the descendants of those who occupied this land a millennium ago have endured here.

Archeologists today consult with federally recognized tribes when their excavations could impact the tribes’ cultural patrimony. The DNA findings mean present-day Big Bend residents should be included in such consultations, Schroeder and Snow said – even if those descendants don’t currently have federal recognition.

“We can go above and beyond that,” Schroeder said, “because we actually know that there’s an unrecognized group here.”

“Which you wouldn’t have known otherwise,” Snow said.

The DNA findings also bring the evidence of the Native past – which abounds on the landscape here – to life, Schroeder said.

“If you can say, this guy right here is related, however distantly, to the people that occupied this spot – it’s the kind of stuff that makes the hair on the back of your neck stand up,” Schroeder said. “It starts to have an impact for living people. And I think that bridges the impact of archeology, and what we do, and the importance of the past in a way that hasn’t been fully realized yet.”

Snow is available to visit with Big Bend residents interested in the DNA work. She can be reached by email, at Meradeth.Snow@umontana.edu.