In Presidio County, Archeologists Document the Ancient Architecture of Warfare

The interview lasts 5 minutes and is a 4.64 MB download.

Our region’s Native American legacy endures in communities and living cultural traditions – and in countless emblems and traces on the West Texas landscape: in images on cave walls and boulders; in pottery and shards of flint from stone-tool making; in the ashy remains of “earth ovens,” where agaves and sotols were cooked.

Now, researchers have recognized another sign of this deep history – one tied to the gravest of human activities.

On buttes and mesas in southern Presidio County, archeologists with Alpine’s Center for Big Bend Studies are finding dozens of manmade stone “bastions.” The age of these structures is a mystery, but their purpose, the researchers say, is clear. This is the architecture of warfare.

Bryon Schroeder is the director of the Center for Big Bend Studies.

Schroeder is standing atop a windswept mesa, above the fiery volcanic wastes of the Sierra Vieja Breaks. Before him are half a dozen low walls, built from slabs of red rock. It is potent, even uncanny, to encounter these structures – seemingly unaltered by untold years.

The walls are U-shaped, and overlook a valley that leads to the Rio Grande, some 5 miles away. Behind them is a precipitous slope. Their defensive utility is readily apparent: here, behind a wall, a cliff at his back, a fighter could hold out.

And it’s not just this mesa – the same structures are found on high points all around the valley. One mesa has 43 bastions – and the main route to the top is blocked with stones. 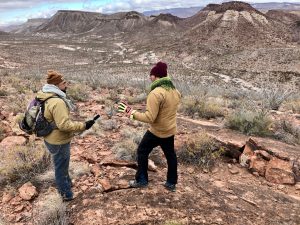 Photograph courtesy Chris Hillen. On butes and mesas below the Sierra Vieja Mountains in Presidio County, archaeologists have recently documented dozens of manmade stone “bastions.” Though the age of the structures is uncertain, their purpose, researchers say, is clear. This is the architecture of warfare.

Schroeder began his career in Wyoming and Montana, and Indigenous fortifications and defensives sites were an early focus. These West Texas bastions, he said, are strikingly similar to those in the Northern Rockies.

That similarity could shed light on why these structures were built.

The northern evidence suggests bastions were part of a military strategy. A group of fighters would strike an enemy, and fall back to the bastions. These protected positions, on high ground, could give them the edge.

“If you use a lot of the ethnohistoric stuff from further up in the Rockies,” Schroeder said, “it’s that they know they’re actively going to go out and start something with somebody, and they want to move them back through the terrain in a way that they know that they’ll win.”

What were the circumstances of the conflict here?

The U.S. archeological record suggests that warfare was exceedingly rare during most of prehistory. And around the world, studies show that hunter-gatherer societies rarely engage in war.

And yet there’s also evidence that violence increased in the centuries immediately preceding European arrival. Rising populations – and, in the Southwest, extreme drought – fueled competition for resources, as well as migration. Life expectancy dropped – many skeletal remains from the period are pierced with projectile points.

Schroeder said that, for now, he can only speculate about when the bastions were built. But he suspects they reflect the wider late-prehistoric pattern.

In the context of displacement, resource depletion and drought, settled communities along the Rio Grande – and the corn they contained – might have been targets.

“To me, it starts to indicate there are more populations here that maybe didn’t know each other than there had been prior,” Schroeder said. “As I envision this right now – and I could totally be wrong – I would envision this as a nomadic group going down to start something with the La Junta villagers.”

Of course, European incursion brought a new intensification of violence. The Spanish raided villages here for slave labor – Native resistance followed. Later still, this rugged terrain west of the Chinati Mountains was known as “the runway of the Indians,” a staging ground for Apache insurgents. The bastions could date from one of those periods.

It’s a vivid mystery, and it speaks of harsh episodes in a harsh land. Violence, of course, was not the only thing that happened here. This very area – part of Jeff Fort’s Pinto Canyon Ranch – abounds in rock art. The Rio Grande here was a corridor of trade and travel. But the bastions show that the Big Bend’s deep history – like every history – includes its shadows.