Groundwater War! Law, Politics, and the Texas Rule of Capture

ALPINE, TX — Groundwater provides more than sixty percent of Texas’ water needs. Unlike surface water, which can be managed for the general public interest through applicable laws, groundwater is controlled by the controversial “rule of capture,” which provides absolute control of groundwater to the owner of the overlying land. Under this rule, the landowner can pump groundwater with few restrictions and little regard to neighboring properties, or to the resource itself. The rule is applied in Far West Texas to sell groundwater to distant municipalities such as El Paso and Midland. 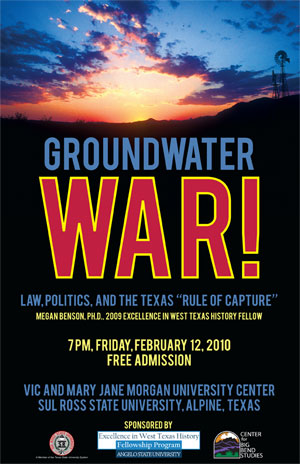 How did this “rule of capture” come to be? Does this early twentieth-century ruling serve Texas and Texans well today?

Sul Ross State University and the Center for Big Bend Studies welcome environmental historian Dr. Megan Benson for a lecture on the evolution of Texas groundwater law, Friday evening, February 12, 2010. Dr. Benson will describe the courtroom drama and explain the politically charged environment that gave birth in 1904 to the controversial “rule of capture,” known colloquially as “the law of the biggest pump.”

An expert in the history of water law, Dr. Benson received her Ph.D. in American History from the University of Oklahoma in 2003. Recipient of the 2009 Fellowship for Excellence in West Texas History from the West Texas Collection of Angelo State University, her fellowship research explores the intersection of Texas groundwater law with the Ogallala aquifer, lessons which apply directly to the Trans-Pecos region of Texas. Dr. Benson’s excellence in historical research and writing is evidenced by her receipt of the 2002 Edward Everett Dale Award for Best Dissertation in Western History from the University of Oklahoma, and her receipt of the 2008 Vivian A. Paladin Award for best article from Montana Magazine: The Magazine of Western History for her two-part article, “The Fight for Crow Water.”