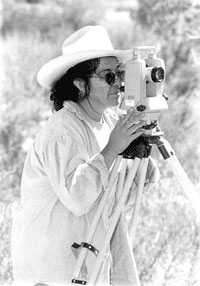 Staff included Brandon Young, a graduate student at the University of Texas at San Antonio, who was a teaching assistant for Mallouf; Marty Estrada, logistics; and cooks Shawn and Lorisa Blackshear.

Mallouf said the buried ring midden site was chosen because it is endangered by erosion. The site is located on a tributary of Gilliland Canyon which runs northwest-southeast through the Glass Mountains.

“It was exposed by a severe flood in 1991 and only half of the ring midden is left. The other half washed into the creek bed. The next time there is a big flood in this drainage system, it could all be washed away,” said Mallouf, Sul Ross faculty member and director of the SRSU Center for Big Bend Studies. 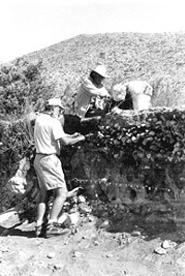 A huge, multiple oven feature that is 14.5 meters in diameter, the midden was made by prehistoric hunters and gatherers between 1000 B.C. and 500 A.D., according to Mallouf.

“We base the dating on several Paisano dart points found during excavation. Charcoal samples are also being submitted for radiocarbon dating,” he said, and added that the dig was complicated for the students because of the unrelenting sun and the complicated structure of the oven midden.

“The oven was originally constructed within a natural feature, an old arroyo cut,” Mallouf said. “It was an open work area with a huge baking oven. A large pit was dug by the Indians and lined with rock. Wood was then burned in the pit to make a thick bed of hot coals, which were then covered with thin stone slabs. Food (probably sotol heads and lechuguilla bulbs) was next layered into the pit, then covered with vegetation, rocks, and dirt and left to bake two to three days. The intense heat caused stones lining the pit to break up.”

Mallouf explained that burned and fractured stones were dug out to extract the food. As broken rock was thrown out, the pit was relined, and the baking process repeated over and over. As new pits were dug into older pits, the baking process left a complicated deposit for archeologists to study. The dig explored the original large baking pit, several meters in diameter, and a number of smaller pits dug at various times in other areas of the feature.

“Because of the prolific plant foods, this canyon system was a great hunter-gatherer area,” Mallouf said, “as well as the only relatively easy route through the Glass Mountains. Lechuguilla, sotol, yucca, agarita bushes, and lots of medicinal plants grew throughout the area, both in the past and in the present. The area provided a combination of easy access, excellent food plants, game animals, good campgrounds, and good water sources at that time.”

At the base of the midden, field school students found the ancient living surface used by the prehistoric Native Americans. They found five dart points, one arrowpoint, and other stone tools and tool-making debris at different stratigraphic levels in the site.

To ease the effects of the sun, the students set up tents by a bunkhouse where the Blackshears prepared meals and a stock tank was close by for swimming.

“We did have to put up a fence around the bunkhouse and stock tank to keep the friendly cows out,” Shawn Blackshear said.

Excavation also took place at Bedichek Rockshelter, named by Victor J. Smith, pioneer archeologist of the Big Bend/Trans-Pecos area, for Roy Bedichek, a well-known author and naturalist. Smith, an early self-trained archeologist, first investigated this shelter about 1930. He was an industrial technology teacher at Sul Ross from the 1920s to 1950. 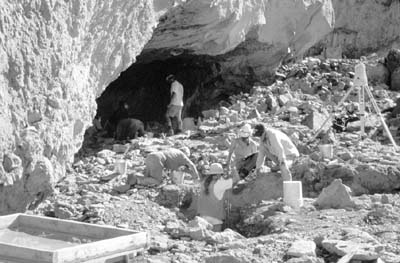 Located high up on a rhyolite rock bluff in Sunny Glen Canyon, the rockshelter contains large amounts of prehistoric cultural debris down the front slope. The rock art at the back of the shelter consists of red pictographs.

“The rock art stylistically appears to be Late Prehistoric. It has been damaged over the years by white chalk drawn on and around the pictographs, ” Mallouf said. “Also, someone sprayed lacquer on them, and the lacquer has darkened with age.”

Hat Turner allowed the class to do contour mapping (plane table mapping) and also conduct scientifically controlled test excavations at the site to determine age and kind of the cultural deposits.

“The class found a series of stratified occupations, the oldest on the bottom, which dates to at least 1000 B.C. (evidence of Late Archaic),” Mallouf said. “As at the ring midden, we maintained detailed horizontal and vertical controls and know the levels, depths, and associations of all recovered artifacts. We mapped the artifacts in situ (in place in the ground) and mapped the rock art to scale. Pauline Hernandez made exact scale drawings and colorings of the rock art.”

Evidence indicated that the inhabitants were hunters and gatherers. Matting, grass bedding, and cordage (strings woven of lechuguilla fibers) were found. The students also found quids (Mallouf said that the natives chewed the bases of sotol leaves and threw down the remains on which you can sometimes see the teeth marks), atlatl points, other stone tools and tool-making debris, as well as charcoal from fires.

“We recorded seven other prehistoric rockshelters and open campsites along the creek,” Mallouf said. “We also recorded two historic house sites dating from the 1880s forward.” At one of the earliest historic sites, shards of “flown blue” ceramic earthenware were found, “like pieces of plates and saucers, likely broken family heirlooms, that could go back to the mid-1800s.”

“Our work revealed two different kinds of sites and environments hunters and gatherers occupied during the same time period [about 1000 B.C.-500 A.D.],” Mallouf said. “Different sites had different functions. In this case, one was for plant processing, out in the open. It was chosen for the plants that were there to process. The other was a shelter from the elements, a great place to live. It was warm in the winter, cool in the summer. It was a shelter from the wind with soft deposits to sleep on and a floor easy to dig pits in. It was also located up high and provided good visibility.”

Mallouf stressed his appreciation for the support of both landowners, saying, “they laid out the red carpet for us.”

Both Turner and Mills expressed satisfaction with the excavations.

“There are a lot of things yet to be discovered,” Turner said. “I’ve always had an interest in archeology, and I’ve learned a lot from Bob and from what he has shown me.” Turner said he has been interested in archeology as an amateur and during the past two to three years has found metates and manos (stones used for grinding foods) and numerous stone tools of all kinds.

Mills said that the summer work was the first real dating/excavation done on the ranch, which has been owned by his family since the 1920s. The only data available are the points collected by the Mills family, mostly during the 1950s to 1960s when they lived on the ranch. Mallouf is using them for baseline data.

Mills found the ring midden excavation especially interesting and visited the site during the dig. He is looking forward to getting the radiocarbon dating information.

“We have had possession of the land roughly 70 years,” Mills said, “and finding out that the Indians were there 10,000 years ago makes our time seem insignificant. It is hard to imagine them living there all those years.”

Plans for the Mills Ranch include continued research by Young who assisted Mallouf with the summer field school. His thesis work for the University of Texas at San Antonio, being done through the Center for Big Bend Studies at Sul Ross, will focus on the ranch. Future work at Bedichek Rockshelter will be continued by professional archeological staff of the Center for Big Bend Studies.