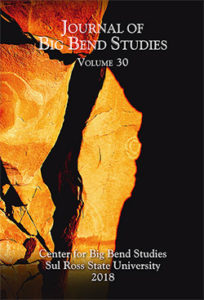 John Bigelow Jr.: Officer of the Tenth U.S. Cavalry, Military Intellectual, and Nexus Between the West and the Eastern Establishment
C.M. Mayo

Of the multitude of officers who served with the Tenth U.S. Cavalry and its African American “Buffalo” soldiers in the Big Bend, one of the most accomplished and incomparably well-connected was Lieutenant John Bigelow Jr. (1854–1936). This paper reviews the published and some unpublished biographical material, as well as the socio-cultural context of the life and career of this exceptional officer.

The U.S. Army Finds A Way: The Great Wagon Train of 1849
Chris Hale

When the Mexican War formally ended on May 30, 1848, the U.S. Army needed to establish posts in West Texas and New Mexico to secure the newly acquired lands. The challenge was that to supply these posts meant crossing a vast unexplored region of brutal terrain. On June 1, 1849, one of the largest peacetime wagon trains, and arguably the most important in American history, left San Antonio and 100 days later reached El Paso. This is the story of how the U.S. Army met the challenge with hundreds of wagons and thousands of animals. A new road, the Lower or Military Road, was born, and immediately commerce began flowing routinely through the region.

This article explores how a coalition of American protestant churches, missionaries, and civil society organizations attempted to export their moral crusade for alcohol and drug prohibition, and other vices from the United States to Mexico. The focus of this analysis is the anti-alcohol activities of these groups at the U.S.-Mexico border during the period of Prohibition (1920–1933) when the manufacture and sale of alcohol were forbidden by the Eighteenth Amendment to the U.S. Constitution. A central purpose for these moral reformers was to contain alcohol consumption and trade at the U.S.-Mexico border. During Prohibition, Americans crossed into Mexico to drink and gamble, as well as to smuggle alcohol and drugs back home. In an attempt to contain these activities, American protestant groups tried to pressure Mexican and American authorities to close the ports of entry or to establish a dry zone along the border. Most of their efforts were ultimately unsuccessful; alcohol never became a part of the U.S.-Mexico formal diplomacy, and alcohol prohibition never gained enough popularity in Mexico. However, in 1898 with the U.S. acquisition of new territories in Asia, narcotics became part of the American global agenda; the federal government joined the social reformers’ fight against drugs in the world arena. Since the beginning of the twentieth century, narcotics prohibitionist policies have remained as part of the U.S.-Mexico relations, with all the negative consequences of black markets, violence, and corruption that have resulted since their foundation.

In October 1915 from Fort Bliss Troops A, B, C, and D, First Squadron, Eighth Cavalry, deployed in the western part of the Big Bend District to Fort Hancock and Sierra Blanca. The squadron was led by Major George Tayloe Langhorne, who would become a legend in the Big Bend over the next four years. In Troop D was a new officer transferred from the Fifteenth Cavalry, Second Lieutenant George S. Patton Jr. As there were no other officers in Troop D when he joined, Lieutenant Patton temporarily commanded the troop, as well as had duties as the acting squadron adjutant, quartermaster, and commissary officer. Patton was stationed at Sierra Blanca for three months, from October 18, 1915, until January 20, 1916, when D Troop returned to Fort Bliss. Sierra Blanca was Patton’s only station in the Big Bend but he led a number of difficult, lengthy patrols and became well acquainted with the rugged terrain of the region and wrote a significant number of letters detailing his Big Bend adventures. His wife Beatrice joined him for a visit and the two, although from very privileged backgrounds, got on well with the locals, becoming popular enough to rate a farewell dinner sponsored by the citizens. After returning to Fort Bliss, Patton was detailed to be an aide to Brigadier General John J. Pershing for the Punitive Expedition.

“An Illustrious Victory”: Hugo O’Conor’s Battle with the Apaches in the Davis Mountains
Mark Santiago

In November of 1773 Hugo O’Conor, an Irish exile serving as a regular Spanish military officer, set out from La Junta de los Ríos on the Rio Grande to conduct a large-scale campaign into the heart of Mescalero Apache territory in the Davis Mountains of West Texas. O’Conor had previously seen service in Europe and the Caribbean and had been the governor of Texas from 1767 to 1770. Two years later he was named the first commandant inspector of the Interior Provinces, tasked with bolstering the defenses of the northern frontier of New Spain by executing the famous line of presidios while simultaneously confronting the continuous hostility of the Apache Indians in the region. In an attempt to forestall Apache raids, O’Conor led what would become a hallmark of his tenure—aggressive assaults against the Apache homelands designed to bring war to their doorsteps, rather than conducting a passive defense. His campaign diary clearly shows the tactics he used to achieve a great victory. His success established a pattern that proved the value of offensive operations against the Apaches as a new strategy that would ultimately lead both Spaniards and Apaches toward accommodation.

Recent research at select rock art sites in Trans-Pecos Texas has uncovered evidence of past astronomical observations. Imagery associated with the summer solstice occurs at two sites in the Black Hills of Brewster County—the Pecked Cupule and Beehive sites—and the former also contains rock art linked to the winter solstice. These findings represent the first confirmed evidence in the region of archaeoastronomical imagery (i.e., imagery associated with the astronomical knowledge of prehistoric cultures) and raise questions about who was responsible for their creation and to what end.

In 1933 the land that was first set aside as Texas Canyons State Park began its unconventional path to national park status. While the history of Big Bend National Park is seemingly well known, there are many aspects that have been overlooked. This article examines the public’s perceptions of the development of the state, and later national, park, a topic that has received little to no attention. Park advocates focused on several themes to promote development of the park; the creation of a park in the Big Bend would not only protect and preserve the natural scenic beauty of the region, it would bring with it economic incentives as well—namely tourism and employment. This article follows and traces these themes through the use of official documents and Texas newspapers to show support for the park through its initial phases of development from 1933 to 1944.