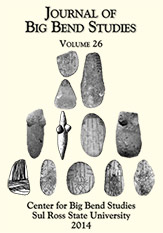 A Murder in the Big Bend: The Killing of Will Noel at Shafter in October 1889
Troy M. Ainsworth

With the gradual increase of both Hispanic and Anglo populations in Presidio County throughout the nineteenth century, many settlers sought to improve the quality of their lives through honest labor. Many sections of the land were conducive for raising livestock, and cattlemen brought their herds from other Texas counties to the extent that, in the decades after the American Civil War, ranches had been established throughout Presidio County. Milton Faver was among the pioneer ranchers in the county who successfully managed and operated three ranches and greatly elevated his status and wealth as a result of his labor. However, the westward movement of Americans during the century also introduced a lawless element on the frontier. Livestock theft was a common occurrence throughout western Texas. On a societal level, class distinctions between the wealthy and poor on the frontier became pronounced and, as a result of such distinctions, violence occasionally resulted. The murder of Will Noel in Shafter, Texas, represents one such instance in which class distinction was a contributing motive in the crime. In the larger perspective, this violent crime embodies many of the archetypal thematic characteristics of the overall narrative of the popular conception of the American West in the nineteenth century.

The Case for a More Plausible Narrative for How the Chinati Mountains Got Their Name
Oscar Rodríguez, Amber Rodríguez, and David Gohre

The popular explanation for how the Chinati Mountains got their name is, while undocumented, a believable folk tale. As the story goes, they were named for the grackle, and the term that was used to coin the placename was the unique northern Mexican adaption of the Nahuatl word for that blackbird, tzanatl. Since at least the 1770s when the Spanish moved into La Junta until now, these mountains have been known by local Spanish-speakers as the Sierra del Chanate. Although these mountains present no obvious justification to invoke this supposed namesake, the placename prospered over the alternatives and was passed on by the Mexicans to the Texans, who then Anglicized it and arrived at Chinati.

The authors argue that this narrative is improbable historically and linguistically. They point out that it depends on improbable conjectures and perhaps overlooking the presence of the Apaches, who used to be as ubiquitous in the region as the grackles. They also propose that a more plausible etymology emerges if the Apaches’ influence on the Spanish, Mexicans, and Texans is allowed; namely, that the placename originates from the similar-sounding Athabaskan word for the mountain pass at the western edge of the Chinatis, chinaitih.

Roll Call of the Dead: An Accounting of Army Deaths at Fort Davis, Texas, 1854–1891
Frank Deglman and Donna G. Smith

With a mortality rate of nearly three percent, the odds of dying while serving in the U.S. Army at Fort Davis, Texas, during the Indian Wars was substantially greater than in America’s modern-day, low-intensity military conflicts. Disease and illness were the leading killers at the Army post of Fort Davis. In contrast, nowadays the main cause of death in the military is due to hostile action.

In the archival records at Fort Davis National Historic Site (FDNHS), the authors searched numerous old Army reports to locate the names of those who died during the post’s operational years. The main research goal was to generate a comprehensive list of assigned soldiers who died—whether at the post, in the field, or while at another military garrison. In 1892, the year after Fort Davis closed, a contractor was hired to disinter bodies from at least six Fort Davis cemeteries utilized during its years as an active post. Research shows that a number of bodies still remain, but their exact locations are undetermined.

Decorated stones from Southwest Texas and adjacent areas of Mexico are mentioned in the archaeological literature at least as early as the 1930s and 1940s. They were the subject of increased research in the 1950s and 1960s when excavations conducted prior to construction of the Lake Amistad Dam in Val Verde County, Texas, recovered a number of specimens. This research consisted primarily of artifact descriptions and attempts to correlate potential design attributes with temporal periods. The motifs on decorated specimens are often difficult to identify, but frequently appear to include human attributes. This has led some to suggest that these artifacts may have served as proxies for real people in curing and fertility rites. However, the power and purpose of these items may not rest solely in the imagery of the artifact itself, but also in the context from which the original stone was found or within which the stone was placed, offerings or other ritual activity surrounding the creation of the decorated stone, use of corresponding paraphernalia, or a combination of these things. This paper explores ethnographic examples of similar portable art and the purpose of these items, perhaps providing additional insight into the use of the decorated stones from the present study area.

When They Were Equal: Alpine and Marfa in 1940
Paul Wright

Prior to 1940, Marfa’s population was higher than Alpine’s. However, by 1940, Alpine attained an equal population and has since become the dominant town in the Big Bend, while Marfa’s current population is only half that of 1940. This study compares demographic, economic, and social characteristics of Alpine and Marfa in 1940 to determine in what ways they were equal or different, and whether or not one town had a stronger economy. Characteristics described provide a benchmark from which to measure changes that have occurred in both towns since the beginning of World War II. The analysis shows there were economic similarities but the towns differed demographically in many ways, and there was far more wealth collectively and per capita in Alpine. Many differences were attributable to differing ethnic distributions; however, the impacts of Sul Ross State Teachers College in Alpine and Fort D.A. Russell in Marfa had led to a more affluent “Anglo” population in Alpine whereas Marfa “Mexicans” lived in somewhat better circumstances than their Alpine counterparts. Alpine weathered the Great Depression better than Marfa and by 1940 was moving into prominence. However, the data here provide no “smoking gun” indicating Alpine would become completely dominant.

Money dealings came to northern New Spain at an early date. Spanish Conquistadors and their offspring moved rapidly in efforts to find and extract gold and silver, the abundant and most precious rare earth resources of the new land. Native Americans, whose land they exploited, quickly adjusted from a barter economy to the use of money. By the eighteenth century, coinage prevailed as the primary medium of exchange. Even though Native-American trade routes which, from ancient times, had originated as far down the Pacific coast as Guatemala and trekked into and through the “Big Bend,” it took the Spanish Conquest and subsequent invasion to open roads, or corridors, over which wheeled oxen-and-mule-drawn carts could pass while carrying heavy loads of equipage and trade items. Before mining camps and the settlements which came with them could be effectively utilized, a sustainable agriculture was necessary. Farming entered the Chihuahuan Desert region in the current-day Mexican state of Aguascalientes and Zacatecas then moved rapidly northward into present-day Chihuahua when silver was discovered at Santa Bárbara in 1564 CE. Commerce necessarily followed, and quickly. In the fifth through the seventh decades of the eighteenth century fortifications, known as presidios, were established at various points along the south side of the Rio Grande in order to fend off attacks by Apache and other nomadic Native American bands. Each of these presidios had a support community of sorts, and an agricultural subculture. Except for present-day eastern Texas (Nacogdoches, and later, San Antonio), New Mexico, and La Junta de los Ríos (now Presidio, Texas, and Ojinaga, Chihuahua) little such Spanish settlement had taken place, especially in the Big Bend, a despoblado region on both sides of the river. The Mexican War (1846–1848), however, and resultant Treaty of Guadalupe Hidalgo (1850) changed that, and Anglo-American settlement, perhaps led by Milton Faver’s ranching interests and the discovery of silver at Shafter, began to open the arid Big Bend. By the second decade of the twentieth century Anglo, some Black, as well as extensive Mexican settlement brought roads, ranching, crop agriculture and competitive commerce to the north side of the “Great River.” Modernity, for better or worse, was here to stay.

The sense that resides in me most clearly when I think back on the twelve McMurtrys (all dead now) is of the intensity and depth of their hunger for land: American land, surveyed legal acreage that would relieve them of nomadism (and of the disenfranchisement of peasant Europe) and let everybody know that they were not shiftless people. (Larry McMurtry, Walter Benjamin at the Dairy Queen: Reflections at Sixty and Beyond.)

Letters from Texas: An Army Wife on the Texas Frontier 1856–1860
Ann Dixon

Laura Clark Carpenter was born in Maine, but traveled to Texas in the mid-1850s to teach at a Brazoria plantation. She later met and married Captain Stephen Decatur Carpenter and spent the rest of her life at Fort Lancaster and then Fort Stockton, where she died. She left letters that speak of her travels to Texas and her life at Fort Lancaster. This article interweaves the history of Fort Lancaster, an isolated West Texas fort, with Laura’s life depicted in her own letters as well as letters of others.