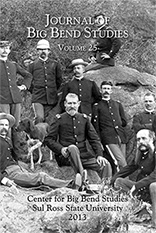 A prehistoric human burial was discovered in a deep rock crevice in northwestern Brewster County, Texas, and subsequently dug by relic hunters in 1968. The crevice assemblage, while mixed internally, was kept intact and uncontaminated, and was loaned for study to the Center for Big Bend Studies, Sul Ross State University, in 2005. Analysis indicates that a minimum of 8 individuals were interred in the crevice, which also contained 44 artifacts of stone and shell, and 235 specimens of faunal bone. Bone collagen samples from two individuals yielded 2-sigma calibrated assays of A.D. 880—1010 and A.D. 1170—1280, indicating that they were interred at separate events during the Late Prehistoric period. Artifactual evidence suggests that earlier remains from the Late Archaic period were interred in the crevice as well. The findings from Ghost Ridge (41BS2618) supplement a growing body of data concerning human health and mortuary practices in the Texas Big Bend.

“Bloody Receipts” details and explores the relation among scalp hunting, international security, and internal safety and investigates the rise of scalp hunting in northern Mexico and the American Southwest. This article also elucidates the reasons why Mexican governments, such as those in the states of Chihuahua and Sonora, monetarily endorsed American scalp hunting gangs. Additionally, the article reveals that what seemed to be a solution to Apache and Comanche raids in fact made the situation worse. My thesis is that, by hiring violent American mercenaries, the Mexican state governments opened up a Pandoras Box of destruction as these filibusters killed peaceful Native Americans and Mexican citizens for the bounty. Native Americans, as the historian Ralph Smith has claimed, feared most of all being scalped because “scalping is annihilation; the soul ceases to exist.” The Mexican government believed sending out scalp hunters would be the firmest retribution against Native American incursion; yet the result was far from what they had in mind. This paper uses memoirs, travel narratives, newspaper articles, and governmental reports to show how and why this solution failed. Other than the works by the historian Ralph Smith, scalp hunting’s cultural, security, racist, or economic reasons have been largely ignored by scholars. My research shows that the state governments of northern Mexico knew of this psychological warfare and, for safety purposes, hired scalp hunters to drive away the Native Americans and protect the local inhabitants but failed to foresee why the economic incentive could lead to disastrous results.

Till Death (or Discharge) Do Us Part: The State of Medicine at the Nineteenth Century U.S. Army Post of Fort Davis, Texas
Donna Gerstle Smith

By nineteenth century standards, the U.S. Army Medical Department offered state-of-the-art medical care to military personnel stationed at the frontier Army post of Fort Davis. By hiring well-educated physicians trained in allopathic or conventional medicine and providing them with the most up-to-date medical instruments and equipment, the Army Medical Department fulfilled its mission to maintain an Army of physically fit soldiers. Soldiers suffered predominantly from sickness, disease, and accidental injury—not battle wounds. With available medical knowledge providing little understanding of what caused disease or how it spread, Army physicians could not cure disease, so they focused on treating symptoms and on maintaining hygiene and sanitation. Like other nineteenth century physicians, Army doctors—though called surgeons—performed few surgeries. Army doctors’ practice of frequently discharging soldiers with incapacitating illnesses or injuries made for a healthier Army and, incidentally, for a relatively low overall death rate.

Feeding the troops in the late 1800s was paramount to the well-being of soldiers in the field. Wild game helped to sustain the men while on the march, but when stationed at posts such as Fort Davis, a more systematic approach was implemented. Fort Davis had a contract butcher who was responsible for providing the post with beef. During the Civil War, all butchers were required to maintain a butcher book, which recorded information about the cattle slaughtered. After the Civil War, the legislature revisited the regulations and by 1891 butcher books were still required for Fort Davis, along with monitoring by an Inspector of Hides and Animals.

Charles H. Mahle was the contract butcher for Fort Davis while it was an active fort; after the closure he became a retail butcher for the townspeople of Fort Davis, assisted by his wife and apprentice butcher. His records reflect the changes that occurred in the town and in his own life, as well. These butcher records afford a glimpse into a town that was evolving from dependence on income from the fort to becoming a town unto itself.

Following the outbreak of the Mexican Revolution, a number of graduates of the United States Military Academy (USMA) from the classes of 1870 through 1920 were assigned to the Department of Texas and the Southern Department. Often referred to as the “watch on the Rio Grande,” this service allowed Regular Army officers a chance to hone their military skills in diverse fields such as the Signal Corps, Medical Corps, aviation, and the Quartermaster Corps. Importantly, especially for recent West Point graduates, these officers gained invaluable experience during the Mexican Border Service Campaign that soon translated to battlefield efficiency and success in the Great War. The presence of West Point graduates in Texas during this period is highlighted in the article and forms an important chapter in the ongoing difficulties of border security shared by the United States and Mexico.

On an early summer day in June 1887, the officer complement of Fort Davis, Texas, gathered to have their photograph taken. The group of 15 officers posed in a collection of boulders somewhere on the steep slopes above the post. The session produced two images. New original research reveals these photos include: two recipients of the Medal of Honor; one recipient of the Distinguished Service Cross; four recipients of the Distinguished Service Medal; three Purple Heart recipients; three Civil War veterans; a Brevet Brigadier General from the Civil War; a close personal friend of famed American artist and illustrator Frederic Remington; six future general officers, all from the 3rd Cavalry, several destined to serve in the most senior leadership positions in the Army, including the Army’s Chief Signal Officer and Father of the Army Air Service; two Brigade Commanders; a Division Commander and one Division, Corps, and Army Commander in World War I. From cadet gray, to Army blue, to khaki, and finally olive drab, this small group of officers together accounted for over 464 years of faithful military service to the nation.

In 1910, Presidio was an isolated, tiny border town. It grew enormously as a place of refuge from the violence engendered during the Mexican Revolution. Most of the refugees subsequently departed but were then replaced by Anglos moving to Presidio in anticipation of a boom created by the building of the Orient Railroad through Presidio. The combination of expected economic benefi ts not materializing and the effects of the Great Depression led to “bust” conditions in Presidio, with the exodus of many who came in the late 1920s. Various censuses describe Presidio through the early twentieth century: as a stagnant border crossing (1910), at the height of the refugee infl ux (1920), just prior to the completion of the railroad (1930), and after ten years of disappointment and economic hardships (1940). They show that the economic and social changes were accompanied by huge demographic changes, particularly in ethnicity, place of birth, and occupations. The 1940 census portrays a huge expansion of the federal government beyond its traditional role of regulating the border and the beginning of a transformation of a “Mexican” into a “Hispanic” population with American roots.