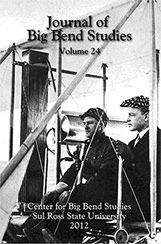 Splashdown in the Rio Grande: The 1911 Flight of Lieutenant Benjamin Foulois and its Historic Place in the First Year of True Military Aviation
John M. Hutchins

1911 was the year that the new-fangled “Fifth Arm” of military aviation moved from war games and speculation to operational challenges with real opponents. This seminal year started with civilian exhibition pilots providing military intelligence to both sides facing off at Juarez during the beginning of the Mexican Revolution. By the end of the year, the Italians were using both aeroplanes and lighter-than-air vessels to perform reconnaissance, propaganda, and bombing missions while at war. Bridging the hesitant start of this significant advancement were a couple of important uses of flying machines by uniformed military fliers. While the French army conducted a real-world operation against rioters and revolutionists in April 1911, the first defensive operational reconnaissance by a bona fide military aviator against an identifiable threat occurred in March along the Rio Grande. Although this activity in a Wright Flyer-B by Lieutenant Benjamin Foulois and civilian Phil Parmelee was officially described as part of U.S. Army maneuvers, it was an attempt to use the new technology to secure the southern border against ongoing violence in Mexico. This paper relies on first-person memoirs and contemporary government documents, newspapers, and aviation journals.

The Big Bend of Texas suffered a number of illegitimate land schemes during the twentieth century’s early decades. Perhaps none was more simple and effective than that devised by the Santa Fe Land Trust & Title Company. In 1936, during the Great Depression, the firm showed up in downtown Dallas with an office in the Santa Fe Building. The office’s name and building location no doubt caught the eye of many potential customers who associated the railroad giant with the small land firm.

During the next several years attorneys at a Galveston firm hired by the Santa Fe Railroad Company worked off and on with state government officials to document that the land company was up to no good. In the meantime, however, the Santa Fe Land Trust & Title’s principals duped a number of aspiring investors from around the United States and Canada, some of whom thought they had purchased land parcels in what today is Big Bend Ranch State Park. This article recounts the land sales hoax and situates it in the Park’s colorful background.

Until recent times, only a single site in the eastern Trans-Pecos region of Texas had been firmly dated to the Early Archaic period. New discoveries by the Center for Big Bend Studies have increased that number to nine sites with securely dated Early Archaic components. Preliminary excavations conducted at five of these nine sites will be described. The recovery of cultural materials along with their contribution toward an understanding of a cultural transition from a Paleoindian to an Early Archaic lifeway will be examined.

The Laguna De Mayrá n and Changes in the Desert Landscape: The Desiccation of a Seasonal Lake in Southern Coahuila and Associated Human Adaptations Through Time
Leticia Gonzá lez Arratia

The Laguna de Mayrá n in the Comarca Lagunera was a seasonal lake within the desert. It was the repository of the Nazas River water–one of the three most important rivers in the Chihuahuan Desert—from ancient times up until the middle of the twentieth century. In all this time, from prehistory to modern times, the use of the lake and recognition of the importance of the Laguna de Mayrá n changed according to the nature of the population that settled nearby. According to archaeological evidence, native people, who were desert-dwelling hunter-gatherers, revered the presence of water and visited the Laguna in large numbers to make use of this precious resource, while the western population that replaced the native residents after the Spanish Conquest chose to settle far away from the lake and closer to the mountains, leaving its shores abandoned. Finally, in the twentieth century, modern society decided to build large dams up in the mountains where the Río Nazas starts its course, ponding water that previously refilled the lake. Consequently, a number of local springs dried up leaving large tracts of ranchland in the desert with no water which resulted in the partial depopulation of the area. The purpose of this paper is to contrast the way in which three contemporaneous historical populations availed themselves of the resources provided by the Laguna de Mayrá n.

For more than a century, studies of Cabeza de Vaca’s “odyssey,” from the Gulf Coast of Texas to the Rio Culiacan in western Mexico, have been focused almost entirely on the few, and often vague, references to landscape and other features of the physical environment contained in his narrative. This approach may have been justified a century ago, when American scholars began the discussion. However, recent historical and anthropological research have made it feasible to relate his experiences to their socio-cultural context–an exciting prospect, since Cabeza de Vaca was a sensitive and sympathetic observer of the Native American groups that he came to know.

As a step in this direction, this paper deals with the segment of Cabeza de Vaca’s travels between departure from Galveston Island (Malhado) in spring 1532, and arrival at La Junta de los Rios, on the Rio Grande, in autumn 1535. His account of this period is here contextualized both anthropologically by reference to research dealing with aboriginal territoriality, trade, and intertribal relations; and historically, by reference to the experiences of other early explorers, most notably the Espejo party of 1582–83. The interpretation presented supports a “trans-Texas” view of Cabeza de Vaca’s transcontinental route; it is incompatible with the southern, or “trans-Mexico” approach, which favors a route almost entirely through Mexico.

A Tale of Two Fronts: Constitutionalist Campaigns During Mexico’s Revolution of 1910 and the Results of those Actions along the United States-Mexico Border, 1913–1914
John Eusebio Klingemann and Gerald Raun

During the spring and summer of 1913, former Maderista leaders from the initial phase of Mexico’s Revolution of 1910 regrouped their armies and launched a movement against the Dictatorship of President Victoriano Huerta. The Constitutionalist forces, as they came to be known, waged a war in northern Mexico against the federal forces of Huerta. Two major battles that took place along the United States-Mexico border, the battle of Nuevo Laredo and the battle of Ojinaga, reveal stark differences that can be attributed to geography, tactics, and the leadership style of officers in Mexico’s federal army as well as the Constitutionalist forces.