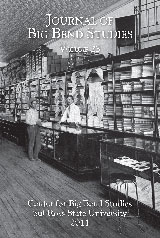 The Marfa–Terlingua Freight Road, built in 1899–1900 to link the railhead of Marfa with the Marfa and Mariposa Mining Company’s mercury mine in the Terlingua Mining District, was vital to the commercial development of Marfa through the first decade of the twentieth century. It accommodated a heavy volume of freight wagon traffic to and from the mine until the mine closed in 1910 and its rival, the Chisos Mining Company, shifted the mining district’s traffic to Alpine. After 1911, it acquired new importance as a military road, serving traffic between Fort D.A. Russell in Marfa and the fort’s outposts along the Rio Grande. Although traffic along the road declined in the 1920s and 1930s, the lower section experienced a resurgence at the beginning of World War II due to the opening of a mercury mine in Fresno Canyon. By 1960, the road was virtually abandoned and was treated as a private road by the few ranchers who traveled it.

On April Fools’ Day, 1923, two Panhandle-Plains cattlemen, about to be indicted, take matters into their own hands, “the old Territorial way.” Two well-known Texas and Southwestern Cattle Raisers Association (TSCRA) inspectors, who had both seen service as regular Texas Rangers in the Big Bend, are shot dead in a Seminole, Texas, hotel lobby. Pitting the old ways against the new—represented by the politically powerful TSCRA—throws the matter before a national audience. The outcome of the murder trials is not surprising; nonetheless, the two unrepentant defendants remained resilient while in prison. What happened will surprise everyone unfamiliar with the story.

There is a legend about Alamito Creek, passed down by Casa Piedra old-timers who were cowboys for Presidio County’s first cattle king, Milton Faver. In the mid-1800s, these men claimed there was no creek, only a little trail. But Faver’s massive herd of longhorns used the trail so frequently that their hooves trampled it into a creek (Vasquez 2010). The legend is a fitting metaphor for Alamito Creek’s history. As a precious water source in arid Presidio and Jeff Davis counties, the Alamito has long attracted people across its drainage. Its many watering holes debuted in written records as a trail followed by Spanish missionaries and explorers. These men were following in the footsteps of indigenous peoples, to whom the creek was a fertile agricultural valley and a path between the Pecos River, Rio Grande, and Río Conchos. In the nineteenth and twentieth centuries, the creek continued to be defined primarily as a well-watered trail—by travelers and freighters on the Chihuahua Trail, military expeditions, cattlemen, farmers and the railroad. But at some point in recent history, the Alamito appears to have returned to its legendary roots. Its waters diverted and diminished, the creek has disappeared in many places, leaving only a trail. This paper traces Alamito Creek through historical accounts in an effort to understand the creek’s past condition and the plant and animal life it supported.

By 4,500 years ago, the vast lands of the Stockton Plateau and the basin-and-range country south and west of the Pecos River in Texas had been transformed into a desert. People of the Middle Archaic period were the beneficiaries of thousands of years of adaptation and technological innovation by their forebears. These people were very successful hunters and gatherers with rich material cultures and strong social networks. They left their mark at over 500 sites in the eastern Trans-Pecos. This work summarizes a synthesis of data regarding the site settings, features, and artifacts of these sites in order to provide a clearer picture of the Middle Archaic milieu.

Mount Carmel Hermitage, located at 7637 Allen Lane off U.S. 277 south of Christoval, Texas, is the only Carmelite hermitage in Texas. Established in 1991, the Hermitage celebrated 20 years of existence in July 2011. Father Fabian Maria Rosette and his fellow hermits follow the monastic way of life, imitating the prophet Elijah. They adhere to a very strict way of life, recognizing the importance of solitude and silence during prayers and work. They work with their hands to support themselves and are well-known for the jellies, breads, and fudge that they make and sell on-line as well as in stores. The goal of the hermitage is to bring people to God, and as a house of prayer it offers a place for people of all denominations to converse with God. The Brothers pray for peace, reconciliation, vocations, and the general welfare of all people.

Extensive rural subdivision in the Big Bend began a century ago when seven different promoters tied sales of mainly 40-acre lots to town lots elsewhere in order to promote the sales of the latter. This strategy was generally successful, with large numbers of both Big Bend rural and town lots sold. However, only one of the town subdivisions was ever extensively developed. Big Bend lots were sold cheaply, but were largely without production or resale values. Most original buyers lost their lands to the state or the federal government for unpaid taxes or for public uses; to surrounding ranches; or to rapacious local residents using “trespass to try title” suits, or in paying back taxes owed by the original buyers. However, a significant number of the originally subdivided lots still exist, many owned by descendants of original buyers, and they are likely to survive into the foreseeable future.

Investigating post-ceramic cultures of the Southwest usually includes analysis of large assemblages of ceramic pieces, or sherds, some of which have been reworked into new tools. The sherds repurposed into use as spindle whorls are rarely further investigated when found among archaeological assemblages. This paper explores the potential of ceramic sherds as whorls, and probes the methods of interpreting their occurrence within the context of the northern Chihuahuan Desert ecoregion and the Jornada Mogollon tradition.

A number of significant publications covering aspects of Big Bend history have been published in the past few years. Although many of these come highly recommended, we have highlighted four of the most recent to share with readers of the journal.

Three additional books, all pictorial histories published by Arcadia Publishing, feature two towns and one sub-region in the larger Big Bend. David Keller’s, Images of America: Alpine, details the growth of a once struggling railroad town that would eventually rise to become the social, economic, and educational hub of the region. Lawrence Francell’s newly released book, Images of America: Fort Davis, recounts the history of the famous frontier military fort as well as the town that ultimately supplanted it. Thomas Alex’s, Images of America: Big Bend National Park and Vicinity, spans a broader area that encompasses the most southerly and picturesque portion of the Big Bend. All three pictorial histories include photographs from both archival as well as private collections, many of which have never been published until now. In addition, all include extended captions that describe and contextualize the images into their larger historical frameworks.

Together, these four books contain a wealth of information that researchers and history buffs alike should find rewarding. We encourage our readers to discover for themselves the ways in which these excellent publications are helping to further our growing understanding of this vast and majestic region.