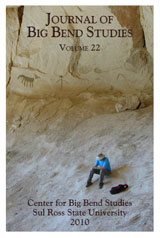 Nothing Drab or Monotonous: Curtis Tunnell and a West Texas Sense of Place
Dan K. Utley

One of the state’s most significant archeologists in the latter part of the twentieth century, Curtis D. Tunnell always maintained a strong sense of place for his native West Texas, a region that figured prominently in his extensive professional work over a half century. Through his academic training, field surveys, and professional collaborations, as well as his capacity as a museum curator, statewide program coordinator, and state agency head, he was at the forefront of scientific investigations on a wide range of important cultural sites, helping establish accepted standards for research and preservation in the process. This article highlights select elements of his important West Texas work within the broader context of his distinguished professional career. Much of the documentation comes from Tunnell’s personal writings and from a series of oral histories he conducted toward the end of his career with the Texas Historical Commission.

In 1923, Horace Wilson Morelock became the third president of Sul Ross State Normal College, a young school with three buildings, offering two years of teacher training. Morelock fought off attempts by the Texas Legislature to close or move it, added upper level courses leading to baccalaureate degrees and won accreditation. Recognizing that Sul Ross’s future and that of the Big Bend were intertwined, he set out to make both known statewide. He took leadership roles in promoting the establishment of Big Bend National Park, in locating the McDonald Observatory in the Davis Mountains, and in the Highway 67 Association. He also supported the Summer Art Colony. Keeping Sul Ross alive during the Depression and World War II taxed his ingenuity but he persevered. He secured funding from the Centennial Commission to build the Museum and from New Deal programs for other campus construction. He offset declining enrollment during World War II with military contracts for naval pilot training and WAAC/WAC training. Morelock retired in August 1945 before the enrollment increases he sought became reality. However, after twenty-two years as president, he left Sul Ross alive and well to take advantage of the post-war enrollment boom.

“We have fingers crossed”: Mining in Big Bend’s Fresno Canyon
Cynthia A. Brandimarte

The correspondence of Harris S. Smith and Homer M. Wilson, long-time Big Bend residents, documents the Smith-Wilson business partnership at Fresno Creek in Presidio County between 1935 and 1945, and uncovers a little-known chapter in the history of mercury mining in Texas. Creating and operating a cinnabar mine (mercury is distilled from cinnabar) near Fresno Creek, Smith and Wilson persevered against the hostile Big Bend environment, a lack of investment capital, and ill health. This article is the first telling of their struggle.

Polly Schaafsma (1980:6) suggested that “recognition of rock art styles is basic to the ordering of data concerning rock art.” While considerable progress has been made in the identification of rock imagery styles in the Lower Pecos and western Trans-Pecos regions of West Texas, the complexity of the rock imagery in the Big Bend region and decades of archeological neglect has, until recently, delayed the progress of such research in the Big Bend. However, recent reviews of the known rock imagery sites on Big Bend Ranch State Park, Presidio and Brewster counties, and the surrounding area have prompted the author to propose a new pictograph style—‘Big Bend Bold’—for some of the rock paintings in this region. This proposed style is characterized by generally large-scale anthropomorphic figures, zoomorphs, geometrics, and abstract images, all of which are painted in black or greenish black. Big Bend Bold figures are further described as bold-lined or solid. This pictograph style may date as early as the Late Prehistoric period and continued into the early Historic period. These paintings are perhaps directly associated with early agriculturalists who were residing at La Junta de los Rios at the time.

The Indian Lodge resort hotel in Davis Mountains State Park was one of the first Civilian Conservation Corps projects in Texas. In spite of present-day tendencies to praise the work of the C.C.C., the papers of the National Park Service, whose architects supervised C.C.C. projects in Texas state parks, reveal the construction of the Lodge to have been fraught with difficulties, including incompetent supervision by political appointees, cost overruns, misappropriation of materials, absence of purchasing procedures, and faulty construction. As a result, it took more than five years, rather than the projected two years, to complete the project. The National Park Service papers provide an insight into the workings of the Civilian Conservation Corps that is at variance with many published histories based on oral history.

Subterranean caves in the Chihuahuan Desert were frequently used by the pre-Hispanic population to deposit their dead. This paper re-examines the documentation and artifactual material from five subterranean caves in the La Laguna region of Coahuila and suggests a new interpretation. The author introduces the hypothesis that such caves were selected deliberately to comply with a specific religious belief that translated the physical characteristics of the cave into a metaphor connecting the disposal of the dead with the birth process. In short, in pre-Hispanic times, subterranean caves became a metaphor for the mother’s womb.

The Price Is Right and Lot Views Are Fantastic! The Progress City and Brewster Townsite Scams
Paul Wright

This paper is essentially a brief history of the Gillett and Hancock families of Alpine and their predecessors, the Humphris and Powe families. All of these families moved to the Big Bend in the 1880s. Prior to coming to Alpine, W.B. Hancock drove cattle up the Great Western Trail to Dodge City for five straight years, 1879–84. Henry Harrison Powe was the victim in the famous incident that gave rise to the legend of the Murder Steer. John Humphris was a well-known rancher and store owner in the early days of the Big Bend. This story comes from the author’s personal reminiscences gained from stories told by his father, Henry Lee Hancock, and his mother Mary Gillett Hancock. Other references are a 100-page manuscript by the author’s paternal grandfather, W.B. Hancock, and a 22-page manuscript written by the author’s maternal grandmother, May Gillett. Another important source was May Gillett’s diary which she kept from 1889 to 1956.

During historic times, the Big Bend region of Texas was enriched by peoples from a wide variety of backgrounds. Many had endured hardships in their former lives and were well prepared for the harshness of the country. Among such pioneers were people who began the journey from their land of origin roughly 3,000 years ago, the Jews. The Texas Jewish population’s influence on Texas culture has been significant, especially considering the low state census numbers for adherents to Judaism. People of Jewish origin arrived in Texas in three main movements: during the Spanish Inquisition in the sixteenth to eighteenth centuries; during the European migration of 1850–1920; and from Latin America over the last twenty years. For the purposes of this paper, by way of introduction, the earliest recorded migration from Spain will be summarized, followed by a study of one man from Europe of particular interest to Southwest Texas, Mayer Halff.