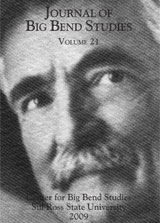 For many years, there has been an incorrect assumption that little of interest occurred in the Big Bend and in West Texas during the Civil War. Throughout the conflict, the region played an important role in both Confederate and Union western operations. Both North and South viewed Chihuahua and its gateway, Presidio del Norte, as valuable sources of supplies and information. Rebels and federals played a game of intrigue in the borderlands of the Trans-Pecos and neutral Mexico, each side using its spies and scouts in an effort to gain a strategic advantage. The Big Bend, and La Junta in particular, proved a hotbed of espionage, murder, and mayhem.

In the American frontier created by the Treaty of Guadalupe-Hidalgo after the Mexican-American War, a number of military outposts were established to protect the fragile new border. In addition to establishing an American presence, they enforced aspects of the treaty that regulated the return of Mexican citizens captured by Indian groups. One Mexican captive, José Maria Bill, who was taken at an early age and raised as part of a Comanche family, eventually left his Indian home, but did not return to Mexico. He instead took up residence in West Texas and worked as an Army guide and scout while leading many expeditions through the rugged terrain of the region.

Englishmen, Railroads, and the San Carlos Coal Mine
Glenn Justice

In May 1892, the San Carlos Coal Company leased and purchased fifty-four thousand acres of land in northwest Presidio County with the intention of mining coal. Because of the remote location of the mine, it was necessary to build a 26.25-mile railroad from the Chispa siding on the Southern Pacific Railroad to San Carlos. John Humpris, an Englishman seeking his fortune in Texas, tried his hand at ranching in Presidio County. He and his partners soon realized that the railroads and their crews presented greater opportunities for businessmen, and opened a chain of general stores in the Big Bend. The Rio Grande Northern Railway Company incorporated in February 1893, with the line being completed three years later. The San Carlos Mining Company commenced mining operations, but the coal produced proved to be of varying quality and insufficient quantity. The Rio Grande Northern Railroad was utilized only once to transport a few carloads of coal from the mine in 1896. Mining operations ceased and Presidio County Sheriff Den Knight sold the abandoned railroad for unpaid franchise taxes the next year.

Henry C. Trost (1860–1933), the principal designer of the architectural firm Trost & Trost, practiced his art for more than fifty years, thirty of which were spent in El Paso, Texas. During his long career, Trost designed as many as six hundred buildings in Colorado, Arizona, New Mexico, Texas, and the Mexican state of Chihuahua. He pioneered the use of reinforced concrete in building construction in El Paso, yet the influence of environmental and cultural factors of the desert southwest on his designs is equally significant. Trost mastered nearly every architectural style popular during his career, and many of his structures remain landmark buildings decades after their completion. Trost achieved national and international acclaim for his creative designs, yet since his death his name and work have become regionalized at best and obscured at worst.

When John Allen Tippit bought Mitre Peak Ranch in 1911 and brought his wife Mollie and family there, tourism was rare, and both cars and roads were primitive. He began a diary in April 1913 which he continued until just before his death in 1939. Entries include how countless visitors came, growing from gatherings at the “Playground” just below their home into tourist operations at Fern Park, now the Mitre Peak Girl Scout Camp, that he called The Mitre Peak Park. The stately peak attracted visitors with its opportunities to climb, ride, swim, and hunt. People came from across Texas and other states, and ultimately the park included a lodge, numerous cottages, their son’s home, and their own home, all filled in summer. Mr. Tippit provided fresh meat, good spring water, and indoor plumbing for his tourists and on top of that, he was a cook, tour guide, chauffeur, and entertainer. Their visitors savored Mollie’s meals, for which they gladly paid sixty cents apiece in the 1930s—fried chicken and gravy with hot biscuits or chicken and dumplings and his favorite, pound cake for dessert.

Land platting in Presidio, Texas reached a fever pitch beginning in 1924, fueled by expectations of population growth and the efforts of R. I. Bledsoe, who platted most of the town and gained ownership of earlier developments. Many Bledsoe developments were marked by innovation in design and efforts to produce “the right kind” of development. The number of lots created far outpaced any potential immediate demand for houses, resulting in most sales being made to outside speculators. After sales stopped in the early 1930s, there was a huge inventory of unsold and abandoned lots that remained until the 1970s. Presidio’s morphology today largely reflects the early platting.

The history of Del Rio, in southwest Texas near the banks of the Rio Grande, includes the stories of the majority Hispanic (Mexican-ancestry) and minority Anglo populations. Though generally ignored in published histories, a smaller minority group of African-American Texans has lived in Del Rio from its earliest days, appearing in the first census of the community. This review of African-American Del Rio residents from the 1870s though the next century covers neighborhoods, families, employment, schools, and churches. The African-American portion of the community was relegated to semi-segregated neighborhoods and schools. Employment opportunities were generally restricted to blue-collar, working-class jobs, including World War II service. Burials were placed in a separate section of the cemetery. Nevertheless, community members made lives for themselves, raised their families, and helped build the Del Rio community.

In the greater Big Bend region, cities south of the border are larger than those in Texas, in large part because of steady growth associated with a surge in manufacturing in recent decades. Using the Mexican cities of Torreón and Monclova, Coahuila as case studies, this paper provides descriptions of recent changes in land use in the two metropolitan areas. It considers fiscal and land-use policies designed to strengthen the region as a platform for exports of manufactured goods to the United States. The most important of these policies involves privatization of ejido farm land at the urban fringe. The North American Free Trade Agreement (NAFTA) trucking corridors, upon which both metropolitan areas are heavily economically dependent, contribute to the spatial stretching of the urban zones of each. Dependency on export-oriented activities makes northern Mexico vulnerable to shifts in the global economy, even while these activities indelibly change the region’s urban geographies.

Six protected areas—three in Texas and three in Mexico—comprise the greater Chihuahuan Desert Transboundary Conservation Corridor (CDTBCC), an area of millions of acres. This conservation network contains multiple levels of social and political organization that may complicate the implementation of policies that attempt to reach across international, institutional, and cultural boundaries. Noting Parry’s 1852 characterization of the region as a “most singular country,” contextual analyses of historical, political, economic, and cultural factors underpinning conservation and localized natural resource use in the region are presented, which reflect the author’s preliminary findings to date on the topic of transboundary conservation in the region.

A significant portion of the Big Bend is protected. In some ways, the land is unified as protected space, but in other ways it is divided, both by the international border running through it and by the individual boundaries of each parcel of land, each of which is managed differently. The Mexican land is protected through government and private projects which encourage the private landowners to conserve their land, while the American land is protected through direct purchase by the government. This difference reflects hundreds, even thousands, of years worth of different histories and cultures playing out in the Big Bend.