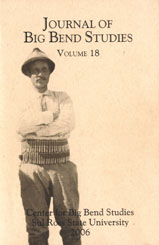 On the eastern end of Big Bend National Park, near Boquillas Canyon, sit the ruins of an aerial tramway that once hauled ore from Mexico across the Rio Grande. What remains of the Ore Terminal, which was the northern discharge point of the tramway, rests three and half miles north of the Rio Grande. From there, the ore was hauled about ninety miles away to Marathon, Texas, for shipment on the Southern Pacific Railway. There has to date been no comprehensive history written about the operation, nor about the people that built it and worked there. What little historians have written is contradictory. This paper is an attempt to clarify the history of the tramway, the mines it served, and the people who built it, in their own words.

Chinese immigrants to the United States in the late 1800s and early 1900s often crossed the border illegally in the Trans-Pecos region of Texas. The American government, spurred on by a growing Nativist sentiment in its citizens, formed a small force of Chinese Exclusion Agents, who were charged with reducing the amount of illegal Chinese immigration. When the perceived threat of encroaching immigrants changed from Chinese to Mexican border crossers, the government drafted these Exclusion Agents, with their knowledge of the region and apprehension techniques, to form the core of the nascent Border Patrol. This paper explores the Chinese Exclusion Agents’ history and their role in forming what was to become the modern-day Border Patrol.

The Madero revolution of 1910-1911 was almost over before it began and, to all intents and purposes, officially expired soon after it was won. Francisco I. Madero came on like a lamb, briefly roared like a lion, and left as a lamb led to slaughter. As a result, the Mexican nation would be drastically changed and would ultimately plunge into two decades of revolution, counterrevolution, and civil war.

Living in San Angelo, Texas, in the early twentieth century, Josefa Lara Camuñez assumed various roles during her lifetime: nurse’s aide, wife, mother, community leader, and business owner. As a Mexican American woman, Josephine or Doña Josefita, as many of her customers called her, deviated from the stereotypical female role of wife and mother, surviving as a business owner while enduring the insidious oppressions of sexism and racism.

For years, Brewster County was embroiled in a massive land dispute resulting from “phantom” surveys and improper placement of the Rio Grande, mainly by surveyor John T. Gano. Key to untangling the resulting ownership problems was determining the “Gano Corner” from which the surveys originated. This study, continued from “More Phantom Surveys Come Home to Roost: The Search for the True Gano Corner,” published in vol. 17 (2005) of The Journal of Big Bend Studies, continues to examine the problems attendant with determining the corner and the true as opposed to the legally determined Gano Corner.

The Pecos River in Literature and Folklore
Doug Braudaway

In American culture, the Pecos represents the dividing line between civilization and wild frontier, and “west of the Pecos” means danger and lawlessness. The Pecos River of New Mexico and West Texas can kill man and beast, and for this reason looms large in Texas folklore and American literature. Although it does not carry much water, it is the only source of water in many areas of semi-desert. As a result, the river’s importance is enlarged beyond its superficial appearance. Pecos River literature includes poetry and prose, fiction and non-fiction, even as the origins of the name “Pecos” are shrouded in mystery. Pecos imagery has been used to craft cowboy tales, romantic and real, and develop literature with a regional identity, making pecoseños a special breed of Texans.

Details of D. M. Poor’s 1868 Chihuahua cattle drive across Texas, through Fort Stockton, and into Mexico at Presidio, based on letters Poor exchanged with his wife, were published in the Journal of Big Bend Studies in 2001. Route descriptions emphasized events and places southwest of San Angelo, but provided little detail on the point of origin, called “Cherokee Spring.” Research in 2002 identified this point as a local feature on private land in south San Saba County. The complete route of the Chihuahua cattle drive can now be described, and more biographical data is now available for the six known participants in the drive. What follows is an update to the original paper, based on further research.

African-Americans in West Texas: A Selected Bibliography
Bruce A. Glasrud