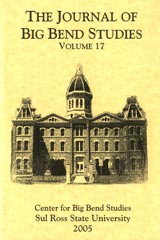 Prehistoric Ritual Destruction of Some Lower Pecos River Style Pictographs: Making Meaning Out of What We Do Not See
Timothy E. Roberts

While the colorful rock paintings that cover many of the limestone rockshelters and overhangs of the Lower Pecos region have drawn the attention of passersby since at least the mid-nineteenth century, the removal of pigment from some figures, probably the result of ritual destruction by prehistoric inhabitants, has drawn less attention. Within the Lower Pecos, most impacts appear to occur only among Lower Pecos River style pictographs, and fall into one of two general types-the rubbing/abrading, scratching, or flaking of pigments from individual figures; and the widespread scratching or combined scratching and abrading of significant portions of pictograph panels, and, in at least one instance, the entire pictograph panel. Drawing from other archeological and ethnographic examples of ritual obliteration of rock imagery or other symbolic features from around the world, this paper explores the possible meanings behind the prehistoric destruction of rock imagery in the Lower Pecos. Regardless of the reason for the destruction, it is clear that the absence of pigment from some Lower Pecos River style figures does have meaning and is worthy of documenting.

In La Junta de los Rios today, the timber framework of the Native-American jacal-pithouse has been replaced with poured concrete and steel rebar. Mud daub for jacal walls is now adobe bricks; wattle latticework has become interlaced concrete mortar skeletons holding the adobe bricks in the walls. The vernacular adobe house remains, conceptually, a prehistoric Native-American jacal-pithouse, albeit, with the addition of the Spanish adobe brick wall and modern construction materials.

The El Paso Salt War: A Review of the Historical Literature
Paul Cool

The El Paso Salt War was an epic event in Texas history, one with continuing relevancy in a nation grappling with racial and ethnic tensions, religious intolerance and fanaticism, entrepreneurial greed, a porous border, and the proper role of the military in civil affairs. Despite these aspects, and the event’s colorful characters, comparatively little has been written about the Salt War since the 1930s. Recent publications have added to our knowledge, but some early errors attributable to narrow research or racism have echoed in later publications. Much research remains to be done and published.

Fort McKavett served as a military post intermittently from March 14, 1852, until June 30, 1883, when it was deactivated because of its decline in importance. Immediately, the transition from military to civilian occupation began as local residents moved into the abandoned post buildings, set up residences and businesses, and anticipated an optimistic future. The two extant issues of the Fort McKavett Breeze, dated August 3 and 10, 1889, provide a brief two-week portrait of this ranching community. The local advertisements of the businesses and brief articles about the residents interspersed throughout these two issues reveal a small but thriving town. However, Fort McKavett never attained the peak of importance it once had as a military post. Nevertheless, the sparsely populated civilian community continued to exist until 1967 when the state purchased the land, and Fort McKavett became a state historical park.

For years, Brewster County was embroiled in a massive land dispute resulting from “phantom” surveys and improper placement of the Rio Grande mainly by John T. Gano. Key to untangling the resulting ownership problems was determining the “Gano Corner” from which the surveys originated. This study discusses the origins of the problems, the legal determination of the Gano Corner and resolution of property lines based on it, and the true as opposed to the legally determined Gano Corner.

During his more than thirty years as president of Mexico, Porfirio Díaz had encouraged foreign investment and United States businessmen had obliged, investing a huge sum of money. As the Mexican Revolution broke out in 1910 these businessmen and the United States government became concerned over possible danger to U.S. citizens and investments in Mexico. This concern increased as the combat approached the border. There was considerable pressure on U.S. President William H. Taft to militarily intervene.

Decreased enrollment and funding during World War II caused many colleges and universities to curtail their athletic programs, including Sul Ross State Teachers College. However, by 1949, as exemplified by an invitation to play in that year’s Tangerine Bowl, Sul Ross had one of America’s most successful small college football programs. The revitalization of the Sul Ross program was made possible by an influx of GI student-athletes and coaches returning from the war. Using Sul Ross as a case study, this article addresses several issues related to the influence that World War II veterans had in revitalizing small college athletics during the 1940s. While the colleges benefited from the ex-servicemen in terms of dramatically increased enrollment numbers, publicity, and funding, the GIs were given access to previously unimaginable educational and athletic opportunities. Finally, the experiences of veterans at Sul Ross reveal both the problems that servicemen had in returning to mainstream society and the value of sports in helping them through that difficult process.

Landmarks of Law West of the Pecos: Preserving Historic Courthouses of the Big Bend
Dan K. Utley and Bob Brinkman

The Texas Historic Courthouse Preservation Program of the Texas Historical Commission has garnered national accolades in recent years for its unique state-county partnership designed to restore the state’s grand courthouses, the most tangible architectural reminders of county government, history and planning. The Trans-Pecos area of Texas encompasses nine large counties, possessing a special collection of historic courthouses that provide a viable regional microcosm for analysis of function, design and cultural history.