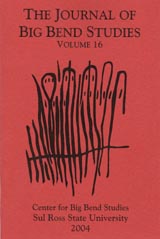 The Chispa Creek Folsom (10,800-10,200 B.P.) site, discovered and excavated by Joe Ben Wheat, has been commonly acknowledged as a major Paleoindian site for some 40 years. Wheat’s findings were never published, and consequently, little is presently known about the Paleoindian occupation at the site. Renewed fieldwork, entailing both survey and excavation, was carried out at Chispa Creek in 2002. This reinvestigation found the site continues to yield evidence of Folsom occupation, though from secondary surface contexts. Both past and present research at Chispa Creek are reviewed and hypotheses offered about the Paleoindian occupation of far West Texas.

Six pigment samples, including yellow, red, dark red, white, and green, were obtained for study from a large anthropomorphic pictograph at Tall Rockshelter (41JD10) in the Big Bend region of Texas. Plasma analyses revealed that only one sample, a red ocher pigment, was satisfactory for a radiocarbon date: it yielded 1280±80 B.P. This date correlates well with a relative dating of 1070-900 B.P. for this pictograph panel based upon prior test excavations conducted by the Center for Big Bend Studies in the shelter floor deposit. Synchrontron X-ray diffraction showed that the unusual green pigment in the pictograph was a form of the commonly used terre verde, in this case principally the mineral celadonite. Notably, no nearby source of celadonite is known.

Historical research of African slaves in colonial Mexico has been concentrated on Mexico City and its neighboring regions. Because of this, colonial northern New Spain has long been overlooked as a region culturally influenced and inhabited by blacks. From the early 1500s until independence from Spain in 1821, African slaves were brought to the New World as a substitute for the dwindling native Indian labor force and were subsequently introduced to Nueva Galicia and then el Reyno de Nueva Vizcaya (northern New Spain). Whether as free people or as slaves, blacks in northern New Spain became integrated with the local culture and forever left a trace of their African ancestry on the mestizaje of the New World.

In 1631 major silver strikes launched a period of rapid growth of Parral in the present-day Mexican state of Chihuahua. As Parral’s silver-based economy expanded so did the number of Apaches sent south by New Mexico governors and prominent citizens. Although Indian slavery was generally considered illegal in Spanish colonies, the concept of “just war” provided a cover of legality in New Spain’s northern frontier, where the military conflict with Apaches and other peoples was ongoing for much of the colonial period. By the end of the 1630s the Apache slave trade was flourishing in Parral and it continued to thrive for thirty years. In 1660 a decision by the Audiencia of Guadalajara, handed down in the previous year, sought to end slavery by manumitting Apache slaves in Parral and all of Nueva Vizcaya. Even with this judicial ruling, Apache slavery did not stop entirely, although it did become more covert.

Aguaverde: A Forgotten Presidio of the Line, 1773-1781
Solveig A. Turpin and Herbert H. Eling Jr.

During a preliminary survey of the ruins of Presidio Santa Rosa María del Sacramento de Aguaverde (1773-1781), which later became Colonia Militar San Vicente (1851-1853) a map of the perimeter walls was produced, the outlines of one bastion storeroom and an isolated structure were exposed, and a list was made of artifacts visible on the surface and in treasure hunter holes. Archival records provide a history of the founding and abandonment of three incarnations of the presidio. Construction of the first Presidio Sacramento began on the San Diego River in 1737 but ceased in 1739 when the garrison was moved to the Santa Rosa valley. In 1773 orders to restructure the presidial line resulted in the founding of a presidio at the spring called Aguaverde, a tributary to the San Diego River. The fort was abandoned in 1781, only to be recommissioned as a Colonia Militar by the Mexican government for a brief two years between 1851 and 1853. Subsequently, the site was plundered for building material and damaged by treasure hunters and construction of a transmission line through its main compound.

Self-taught botanist and amateur archeologist, Edward Palmer explored the state of Coahuila, Mexico, in 1880. Palmer’s explorations were funded by the Peabody Museum at Harvard with the specific understanding that he investigate and retrieve objects from burial caves known to be in the region. Documentation related to Palmer’s investigations is reviewed, a listing of the objects that he recovered is provided, and the subsequent analysis of the objects, which are now housed at Harvard University and the Smithsonian Institution, is discussed. Theoretical perspectives in archeology during the 1880s, in light of the interpretations of today, are briefly presented.

Henry Skillman, born in New Jersey, came to Texas on the Santa Fe Trail where he soon made his mark as a trader, Indian fighter, U.S. Army scout, and the first mail contractor from San Antonio to El Paso. His bravery fighting Apaches, his fierce appearance, and his ingenious dealings with both the Union and Confederate armies earned him a place in Texas history. A popular stop on his mail route was high in the Davis Mountains outside of Fort Davis. The thick grove of oak trees there was named for him and Skillman Grove is now the home of Bloys Camp Meeting, an annual religious camp.

The Search for the “True San Martin Springs”
Paul Wright

In 1890, the Jeff Davis Commissioners Court authorized a re-survey of its northern boundaries using the “true San Martin Springs” to delineate its boundary with Reeves County. Subsequently, Jeff Davis County brought suit in the Texas General Land Office, claiming the true San Martine Spring was actually twenty-six miles northwest of the spring of the same name being used to mark its boundary. More than one thousand square miles would have been added to Jeff Davis County had the suit been successful, but after more than a year of litigation the General Land Office Commissioner rejected the change. This study examines origins of the dispute, testimony concerning the location of the “true” San Martine Spring, and reasons why the suit ultimately failed.

The coming of a railroad to an inland area like the Big Bend meant prosperity and growth. This article discusses the media hype and rampant rumors that occurred in anticipation of completion of railway lines, particularly in the towns of Marfa and Alpine during the early decades of the twentieth century. Most of the information reported here is taken from local newspaper articles and is intended as an introduction to a broader research project investigating the early promotion of this area for settlement and development