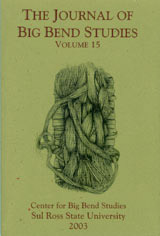 Recent excavations at Carlsbad, New Mexico, have revealed the presence of an intriguing site type previously unknown for the region. Unfortunately, previous diggers had so thoroughly churned the deposits that most of the important contextual details are unknown. The remains, deriving from several occupational episodes that occurred between 1300 B.C. and A.D. 400, may represent a long-term cemetery such as those documented for adjacent regions in Texas. The condition of many of the human bones mirrors that of the animal bones recovered from the same fill, however, raising the contentious question of just how and why the human remains are in similar condition. Although this question cannot be answered because of the contextual problems, the scientific investigation of another site like Punto de los Muertos would greatly illuminate this phenomenon.

Walking the Line: A Preliminary Sandal Chronology From Coahuila and Southwestern Texas
Solveig A. Turpin

The excellent preservation afforded by dry caves in the Lower Pecos and Big Bend regions of Texas and the Cuatro Ciénegas basin of Coahuila has permitted the development of basic sandal typologies appropriate to each region. The chronological sequence, when considered at all, was based on stratigraphic relationships and subjective interpretations until 1988 when a series of radiocarbon dates obtained from Coahuila cave excavations was published. More recent radiocarbon assays of specimens from small shelter excavations and private collections have helped bridge the gap between the Coahuila sequence and the relative chronology assumed for the Lower and Trans-Pecos regions. Plaited two-warp sandals are the most common type in all regions where they were produced en masse throughout the dated sequence. Two dates place the V-weft variation on the plaited type at the early end of that range. Checkerpad sandals, believed to be of considerable antiquity in the Lower Pecos region, are more recent in Coahuila where they overlap the most modern type of the three-braided sandals. Plaited sandals are ubiquitous, checker- pads are less common, and the braided style has been found primarily in Coahuila with outliers in Big Bend and the Lower Pecos regions. Although highly preliminary, the temporal and spatial parameters suggested by the correlation of radiocarbon assays and provenience indicate that sandals are sensitive markers of time and place whose potential has not been fully exploited.

The Lost Mission of El Polvo: Searching for the History of a State Archeological Landmark
Enrique R. Madrid

Spanish Captain Commander Joseph de Ydoiaga and his men stood on the southwestern bank of the Río del Norte on November 30, 1747, looking across the river to the ruins of the abandoned Indian pueblo of Tapacolmes. They saw the adobe walls of a Spanish church or chapel in the pueblo deserted by its Native-American inhabitants who feared encroaching Apaches. By 1870, Tapacolmes had transformed into the Mexican-American settlement of El Polvo, Texas. During the mid-1950s the last remnants of the old Spanish mission walls were leveled by county officials. Part of the old settlement of El Polvo was incorporated by the town of Redford, Texas, and has been designated as a State Archeological Landmark. This paper documents and identifies the mission location through the use of oral history interviews and archival research.

The Tracks Lead South: An Underground Railroad from Texas into Mexico
William A. Boone

The traditional view of the Underground Railroad is of an informal network of clandestine routes that began in the American South and led slaves to freedom in the northern states or Canada. Many of the “conductors” leading these slaves to freedom were either former slaves themselves or whites who acted for religious or moral reasons. While most of the attention has been focused on the routes leading north, these were not the only paths to freedom taken by southern blacks. At least some slaves escaped south into Mexico to find their freedom. While we do know that escaped slaves were welcomed in Mexico, we do not know how many took the southern road.

In 1861, West Texas saw growing traffic between the greater San Antonio area and secessionist or Confederate objectives in New Mexico. Texas provided military units to support General Sibley’s planned invasion of The West. Beginning in the summer of 1861, these units crossed the Big Bend, returning a year later. Recent books detail this once obscure aspect of the Civil War, but first-hand journals, diaries, and letters remain limited. David M. Poor, a Confederate officer from San Antonio, who became part of the Sibley invasion for over a year, left a draft history of his company, letters establishing a courtship with his future wife, Mary O. Mussey of San Antonio, and one letter to his parents from Mesilla, New Mexico. The history document begins with recruitment and departure from San Antonio in May 1861. It mentions events en route to Santa Fe, New Mexico, via Fort Stockton and Mesilla, and various well-known battles, including Val Verde and Pigeon’s Ranch. The retreat to San Antonio after Sibley’s defeat is also mentioned. The document is complete to May 1865, but was probably never officially submitted.

The telegraph, the most revolutionary invention of its day, made nearly instantaneous communications possible in an era when messages that were days or weeks old were considered “new information.” While an upper telegraph line was completed by private enterprise by 1850, the eastern Texas cities of Galveston and Marshall were not connected until 1859, and the capital city of Austin, not until after the Civil War. After the war, the U.S. Army undertook the task of building and maintaining a telegraph line between its frontier forts. The telegraph would play a great role in the life of Fort Davis, being utilized in the campaigns to subdue Victorio, as well as providing information that would be used in the infamous court-martial of the army’s first black West Point graduate, Lt. Henry Flipper.

Vanishing Arches of the Texas Trans-Pecos
Brenda B. Whorton With contributions by Kenneth L. Fallwell

Adobe vernacular architecture is quickly disappearing in the Trans-Pecos of Texas. Along historic trails and waterways a few exemplary structures remain in various stages of deterioration. Several of these structures contain arches constructed of sun-dried adobes. This architectural feature is rare in Texas and in other areas of the southwest, therefore it warrants documentation and preservation.

In 1879, Thomas C. Nelson “surveyed” the boundary line between Pecos and Presidio counties. In 1881, surveyors for the Texas Central (TC) Railroad “surveyed” the land along the Rio Grande in the vicinity of the Pecos-Presidio County line. In 1918, the General Land Office of Texas (GLO) awarded land to Brewster County that it claimed was mistakenly on the Pecos County tax rolls. Pecos County filed suit to recover these lands. In the ensuing trial, it became evident that the original county line had not been determined by the Nelson “survey,” but had been drawn by the GLO on a map connecting the boundary on the Rio Grande as claimed by the TC survey and Barrilla Spring. A new survey ordered by the court revealed a boundary line that did not conform to the boundary claimed by Pecos County or the one determined by the GLO in 1918. Only in 1930 did the GLO abstract all lands along both the Pecos and Terrell County boundaries with Brewster County in accordance with the boundary line accepted today.

The infamous raid on Columbus, New Mexico, in March 1916 has produced considerable speculation primarily among historians in the U.S. as to why Francisco “Pancho” Villa invaded the United States. The various theories that have been proposed are reconsidered in light of more recent documentation.

Rising from humble circumstances in the West Texas town of San Angelo, Eva Camúñez Tucker became one of the Concho country’s most prominent philanthropists. Influenced by a deep Catholic faith and by Mexican-American family values learned from her parents, she has granted millions of dollars to causes ranging from religious instruction, to medicine, to social services, and to education. Those grateful to her include the city of San Angelo, Angelo State University, and even the head of the Catholic Church in Rome. Despite her prominence, Eva Camúñez Tucker remains as modest and unpretentious as when growing up poor in San Angelo’s north side barrio.

Despite innumerable obstacles, during the first four decades of the twentieth century black Texans produced a growing body of significant contributions to Texas and national culture. Their work reflected both the ideals and aspirations of the middle class as well as espousing the lives and goals of the working class in genres such as the “Blues.” Beginning with Sutton E. Griggs and concluding with J. Mason Brewer, this essay reviews the cultural accomplishments in prose, poetry, drama, painting, and music of the black Texas community from 1899 to 1940.

The Mexico-North Research Network is a non-profit consortium of universities, museums, research institutes, and cultural centers located in Mexico and the United States. It was founded in 1998 to promote innovative projects in research, education, and outreach based on collaboration that transcends national, cultural, institutional, and disciplinary boundaries. During the first three years of its existence, Mexico-North’s ability to pursue this mission was challenged by a series of infrastructural and logistical problems, but these were resolved by early 2002. The consortium was then able to initiate a wide array of programs and activities and to develop the resources required to undertake them, entering a period of steady growth that has continued to the present. The history of Mexico-North’s origins provides insights into the diverse processes that accompany the formation of new international non-profit organizations, serving as a case study of the creation of such organizations.