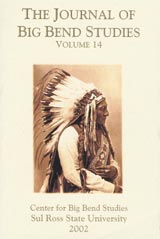 Rock Art in Isolation: The Black Mountains and Red Hills of Hudspeth County
Solveig A. Turpin

Twenty-six newly recorded rock art panels, five in the Black Mountains and 21 in the Red Hills of Hudspeth County, display affinities with Jornada Mogollon and Desert Archaic petroglyphs and pictographs. The identification of Candelaria-style pictographs 80 kms north of the Rio Grande extends the range of this style well beyond its assumed point of origin in Chihuahua, Mexico. The eastern periphery of the Jornada style is also expanded, albeit only slightly. The jagged spires, lofty palisaded walls, and tumbled boulders of these volcanic intrusions afford innumerable niches, crevices, and overhangs suitable for the protection of painted art. The desolate landscape and scarcity of potable water suggest that much of the art was ritually produced, probably as part of the well-documented vision quest or search for spiritual identity that was an inherent part of Native American religion.

A disturbed, prehistoric semi-subterranean cairn burial in the western portion of Big Bend National Park, Texas, was initially discovered in 1987 during a power line survey along Rough Run. Subsequent testing in 1988 revealed the presence of a buried cairn containing a number of Perdiz arrow points interspersed amongst the stones. Excavation in 1990 uncovered an interment, which had been carefully positioned beneath the cairn. Grave goods recovered consist of 73 associated arrow points and arrow point fragments, all but one of which are of the Perdiz type, and three pieces of debitage. This scientifically excavated interment offers a glimpse of the mortuary customs practiced by the makers and users of the ubiquitous Perdiz arrow point.

This article describes a prehistoric site near Iraan, Texas, that includes at least three circular stone-based wickiups. The possibility that this site is part of the Cielo complex, currently defined as existing within a 100-mile radius of a center point near La Junta de Los Rios in the Big Bend region, is examined. A comparison of specific site features with those definitive of Cielo complex sites is made and the issue of a Jumano-Cielo complex link is examined. Verification as a Cielo complex site could have significant implications regarding the geographical extent of the complex and the cultural affiliation.

The Jumano Diaspora: Some More Pieces to the Puzzle
Regge N. Wiseman

Spanish documents indicate that the Southern Plains hunters and traders known as the Jumanos ceased to exist as a distinct group when they joined the Apaches (possibly ancestral Mescaleros and Lipans) about A.D. 1750. Using both documentary evidence and archeological house types that may be of Jumano origin, this paper discusses traces of still other liaisons after that time.

Although Presidio County was created in 1850, the law establishing it did not describe a clear boundary with El Paso County. Not until 1871, when Pecos County was created from it, did Presidio County acquire boundaries that were both specific and legally defensible. These boundaries define the Big Bend region today. However, between the initial division of Presidio County in 1887 and the resolution of the last boundary dispute based on legal definitions, boundaries and even the number of counties were in flux. The evolution of the legal boundaries in the Big Bend region reflect provisions in the Texas Constitution, commonly held ideals concerning the size and function of counties, economic trends at the time the boundaries were in flux, county politics, and vagaries of the legal system.

In 1863, the San Elizario Salt Road was built with public funds to provide access to seemingly endless salt deposits in relict lakebeds west of the Guadalupe Mountains in West Texas. At that time salt was more than a basic dietary element; the mineral was vital for life and commerce and was widely used as a food preservative, among other purposes. When the road gave horse-drawn carts access to the salt deposits, local factions fell into a violent conflict for control of the critical resource. The struggle, known as the Salt War of 1877, opened deep cultural rifts in the borderlands. Its resolution ushered in broad changes in the cultural landscape. Although several possible locations of the historic road have been proposed in the literature, the route has never been positively identified. This article presents archeological and archival evidence to locate the San Elizario Salt Road, describe its historical context, and define its significance.

The most recognized headdress of the Native American has also been referred to as a warbonnet, a term that collectively describes variations of any ornamental headgear worn by the Plains tribes. In 1951, Mrs. Walter L. Frank donated a single trailer, Plains Indian headdress to the Museum of the Big Bend at Sul Ross State University, Alpine, Texas, along with a shield, noting that they had once belonged to the infamous Apache leader, Geronimo. Documentation of the headdress was undertaken in the fall of 2000 with the purpose of dating the artifact and gathering information about its origins, including its maker or makers. Approximate dating of the headdress was possible through identification of construction materials used and techniques of assembly, including beads and beadwork.

The first of March 1929, only seven months after the assassination of president-elect General Álvaro Obregón, the PNR (Partido Nacional Revolucionario), which would later turn into the PRI, was formed. Two days later, four high-ranking generals and the military sector chiefs from the states of Veracruz, Nuevo León, San Luis Potosí, Zacatecas, Durango, Coahuila, and Chihuahua signed a manifesto against the Mexican government. In it they recognized Gen. Gonzalo Escobar as chief of the rebel movement known as the Rebelión Renovadora or Escobarista. After being crushed by the government in several states, this movement came to an end in a battle which took place in the city of Jiménez, Chihuahua, between March 31 and April 2, 1929. More than 3,000 men died in this terrible battle.

A Retrospective of Peso Devaluations, American Business, and American Responses: 1982 and 1994
William A. Boone

In the latter part of the twentieth century the economic relations between the United States and Mexico have been periodically disturbed by rapid and disastrous devaluations of the Mexican peso. Coming with seeming regularity, these periodic implosions of the Mexican monetary system have had similar effects for business on the American side of the border. The last two devaluations, in 1982 and 1994, produced vastly different responses from the American federal government.