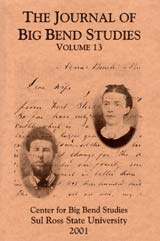 Small, non-rock thermal features are probably common at archeological sites in southeastern New Mexico. Yet, these features have been poorly studied because they are difficult to find, unimpressive in appearance, and usually contain so little carbon that they must be radiocarbon dated using the AMS technique. They are important because they represent the principal type of small hearth or “campfire” used during the late Late Prehistoric and early Historic Native American periods.

Spanish colonial trade between San José del Parral (today’s Hidalgo del Parral) and New Mexico/El Paso del Río del Norte (today’s Ciudad Juárez) existed for nearly two centuries following the discovery of silver ore at Parral in 1631. This trade was a part of the commerce between Parralenses (residents of Parral) and other provinces of New Spain. The focus of this study is upon the trade over the Camino Real de Tierra Adentro together with merchants, stores, commerce, and products exchanged between Parral and New Mexico/El Paso del Río del Norte in the three periods of Parral’s history during the Spanish era-bonanza, decadence, and revitalization. It is based primarily upon Spanish documents in Spain, Mexico City, and the Archivo Histórico de Hidalgo del Parral and supplemented with related published and unpublished materials in Spanish and English.

Records revealed that nearly 400 men with Spanish surnames served in the Texas Rangers between 1838 and 1880, at least 10 of them in the capacity of an officer. Some of the units were entirely made up of Hispanics, but most of them consisted of both Mexican-American and Anglo rangers. The Hispanics that served in the ranks of the Texas Rangers made significant contributions to maintaining the peace along the border with Mexico.

This article traces the history of the family of Valeriano Torres in southwest Texas. It begins with biographical and historical data and traditions typical of the life and times of Torres’ ancestors. It includes a compilation of vignettes that descendants have accumulated through research and by word of mouth. It describes the Torres’ lives beginning in the seventeenth century in Colonial New Spain and ends with the death of Valeriano in 1898.

When he left France in early 1849, Philipp Rondé was hoping for fame and fortune. When he arrived in Chihuahua he got more than he bargained for. He was taken hostage by Apaches led by Mangas Coloradas. In 1861 Rondé published an illustrated article of his experiences in Chihuahua. The following text takes a critical look at the incident.

In 1868, David Morrill Poor, a former Confederate officer from San Antonio, drove 1,100 cattle from east of San Angelo into Mexico over the Chihuahua Trail. This event, sometimes called the Great Chihuahua Cattle Drive, has been described as the largest to date over that trail. While little is known of the event, Poor exchanged over 20 letters with his wife in San Antonio during the drive. These letters, which provide details of the route, herd size, financing, identity of four or five helpers, and other information, were discovered among his papers after 1970. Poor began this drive in October 1868, from a place he identified as Cherokee Spring, somewhere east of San Angelo, and sold the last lot near the Terrazas Hacienda in Chihuahua, Mexico, in January 1869. His route passed through Fort Concho, Fort Stockton, and Presidio del Norte, apparently with minimal losses. The Great Chihuahua Cattle Drive was backed by Gustave Schleicher of San Antonio and was sufficiently successful to motivate later stock drives by Poor. It may also have motivated various members of his extended family to later move into the Fort Stockton, Marfa, and Alpine areas.

Over 200 blank .45-70 rifle cartridges recovered from the banks of an arroyo below the 1878-1882 military outpost at Grierson’s Spring, Texas, are probably the residue of military exercises intended to keep the soldiers and their remuda battle-ready, as well as out of mischief, during the long days spent at this lonely frontier post. An initial reconnaissance of the site demonstrated that an unusually large number of expended shells were strewn on the surface, suggesting that the area was the scene of a heated battle or served as the backdrop for target practice. Subsequently, a grid was imposed on the site, and metal detector finds and exposed artifacts were flagged, plotted, and collected by provenience units. The overwhelming number of blank cartridges contradicted the first assumptions-an exchange of gunfire or target practice-but proximity to Grierson’s Spring still weighed in favor of some sort of military exercise. Archival research and consultation with military experts led to the conclusion that 41RG77 was an arena where the fort remuda was trained to endure gunfire and maintain their battle-preparedness.

One of the great transitions in the borderland culture of West Texas took place when the Southern Pacific railroad was constructed there in the 1880s. Aside from the obvious impact upon ranching, commerce, and transportation in general, there is a charming story of romance and mystery that surrounds the naming of the railroad stations between El Paso and Del Rio. Historical accounts reveal that the superintendent of construction gave the job on occasion to his wife, an erudite woman very fond of poets like Longfellow and Dryden and modern men of letters such as Emerson. Who was she? We will reveal her identity as well as uncover her surprising literary interests. Her reading apparently included a novel by Dostoyevsky, one of the greatest writers in the world. The name of the town of Marfa sprang from the pages of this book as did a second railroad station east of Sanderson, which appears to be named after Dostoyevsky himself. Who really was Marfa, and where did Dostoyevsky get the idea for her? This story of Marfa and the woman on the train is a reminder of the importance of the pioneering woman in settling the West.

Settlement of the West came slowly, based on advances in technology and the harnessing of nature, especially water. In the arid environment of New Mexico’s Pecos Valley, the exploitation of available water resources and labor, combined with corporate land accumulation through manipulation of federal land laws, led to speculation, development, and violence in the frontier region of Southeast New Mexico.

The Madero Revolution and the Bloody Bend
Earl H. Elam

The revolution that shook Mexico between 1910 and 1920 brought to power a new generation of military and political leaders whose antipathy to the old regime, characterized by the policies and leadership of the long presidency of Porfirio Díaz, resulted in constitutional, economic, political, and social changes that are the basis for present Mexican society. For a decade before the fall of 1910, many opponents of Díaz challenged the system, but it was Francisco Madero who marshaled the resources and led the movement that forced the resignation and retirement of Díaz in May 1911. The initial stages of the violence marking Madero’s efforts occurred in northern Mexico and posed concern along the border for the government and citizens of the United States. With the principal activity occurring along the stretch from Ciudad Juárez to Ojinaga and surrounding communities in Chihuahua, the events were closely watched by American authorities who swarmed to the border along the Rio Grande between El Paso and the southern tip of the Big Bend region.

The 1920 census for the three-county area of the Big Bend indicated that about half of the enumerated adult Hispanic population had dwelt in Mexico 10 years earlier. Most of them left due to the violence associated with the Mexican Revolution. This study focuses on the economic and social characteristics of this immigrant Mexican-origin population, which for the most part was truly “starting over.” It seems as if those arriving between 1910 and 1914 made modest progress when compared to those arriving after 1914. Both, however, lagged considerably behind immigrants arriving before 1910. Indeed, the large immigration in the 1910-1919 decade resulted in a reversal of social and economic progress that had been made in the local Mexican population prior to 1910. However, a comparison between social and economic characteristics of first- and second-generation persons born in the U.S. to parents from Mexico compared to immigrants arriving in all periods indicates that upward mobility of the local Hispanic population was slow and limited in scope due to discrimination imposed by the dominant (Anglo-American) society. This paper will discuss the reasons for this phenomenon. Overall, the huge Mexican refugee influx of the 1910s appears to have hindered economic improvement among the Hispanic population that had previously populated the Big Bend; an exodus of working-class Anglo families from the area was one result.

Events in the Southwest border country in 1916-1917, played a key role in the U.S. Army’s adoption of motor trucks and the development of all-weather roads in northern Mexico. Subsequent participation of the United States in World War I necessitated a reliance on trucking with the consequent deterioration of the primitive national road system. Following the War the federal government’s surplus of trucks and other construction-adaptable equipment was donated to the states to build a national road network. Western states received proportionally more equipment than other sections of the country. Road improvements noticeable in northern Mexico in 1916 became evident along the Southwest border from Texas to California by 1926.

Nelson Algren’s novels and short stories set in Texas’ Big Bend region exhibit a unique perspective emphasizing race, class, gender, and labor in ways not seen in other published “stray tales” of the region. A Chicagoan affiliated with the “proletarian literature” movement of the 1930s, Algren as a young man spent many months in West Texas as an itinerant worker and participant observer. Algren set up in Alpine, Texas, in 1933 to write his first novel using the typewriters at Sul Ross State College. The novel, Somebody in Boots, followed Cass McKay, a youthful hobo, as he shuttled back and forth between his native Big Bend, New Orleans, and Chicago. Here and in his other writings, Algren captured the class dilemmas of the landless Anglo poor, their notions of masculinity, and the racism they enforced against Mexican Americans and African Americans. Somebody was based on Algren’s personal experiences, most notably the several months he served in Brewster County’s jail for attempting to steal a Sul Ross typewriter. Algren’s depiction of the prison as a model for white racial domination, and a means by which race may metaphorically transcend class differences between whites, says much about the formation of white identities in Texas’ Big Bend in the 1930s.