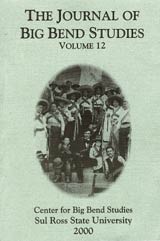 An assemblage of lithic artifacts from site 41BS188 in Big Bend National Park, Brewster County, Texas, was analyzed for this report. The assemblage consists predominantly of fragments, preforms, and whole specimens of Toyah arrow points. Many of the fragmentary specimens were apparently broken during the manufacturing process; therefore the manufacturing trajectory can be deduced from the collection. A radiocarbon sample collected in direct association with Toyah arrow point fragments inside a hearth provides much-needed information for confidently dating this arrow point type in the Big Bend.

Some Thoughts About Bedrock Mortars and Subsistence Group Size in the Northern Trans-Pecos
Regge N. Wiseman

Mortars, whether portable or non-portable, are a poorly understood artifact of prehistoric and historic archeological sites in the Trans-Pecos and adjacent regions. This paper explores various aspects of these distinctive features, including their physical characteristics and their potential for providing information on the social and economic groups that made and used them.

Archeological reconnaissance at the Indio Mountains Research Station has led to the identification of many sites containing fire-cracked rock features. Most of the features, examples of forms familiar throughout the Trans-Pecos region, are generally interpreted as the remains of earth ovens or pit-baking features. However, several sites contain a distinctive style of fire-cracked rock feature which may be attributable to Mescalero Apache use of the study area. Examples of these features are described, and the ethnographic evidence for their use by Mescaleros is summarized.

The Peyote Religion and Mescalero Apache: An Ethnohistorical View from West Texas
Stacy B. Schaefer

The border region of Texas and northern Mexico is native habitat for a small, spineless cactus known as peyote (Lophophora williamsii). For centuries peyote has been revered by indigenous cultures for its mind-altering effects as a ritual sacrament of the gods. This paper will review the route of diffusion of peyote religion proposed by Omer Stewart (1987), Weston La Barre (1938), and Morris Opler (1938), who credit the Lipan Apache for introducing peyote religion to tribes in the United States. James Mooney (1896, 1897, 1898) believed that the Mescalero Apache were the purveyors of peyote religion. Following his reasoning, the idea of “differential diffusion” suggested by La Barre (1960) is discussed as well as a short history of Mescalero trading and raiding practices from which I propose an additional route by which the traditional Mexican peyote religion was spread to the United States, from Chihuahua, through West Texas, into New Mexico via the Mescalero Apache. I compare similarities in Mescalero and Tarahumara peyote use and, based on the research and my conversations with anthropologist Claire R. Farrer (1991, personal communication 1999-2000) discuss the manner in which peyote continues to be used ritually by some Mescalero today.

The industrial revolution, followed by the all-encompassing technological innovations of the twentieth century, changed the world. Prior to 1900, however, many backwater places such as the Big Bend of Texas still had not experienced any appreciable thrust of what was to come. As the pacification of Apache and Comanche populations in Texas came to pass, the Big Bend opened up to settlement. In the 1880s and 1890s Mexicans, principally from the San Carlos area of northern Chihuahua, began establishing ranches in the lower Big Bend, especially the area between Redford and Boquillas. Separated from the mainstream of their own culture, they quickly found themselves surrounded by Anglo-Americans whose cultural traits were different from their own. In order to survive both groups had to make accommodations. The process of acculturation in the Big Bend had begun.

As Company H, Tenth Cavalry rode through the mountain passes toward Fort Davis in the spring of 1875, they could not have imagined that the isolated outpost in western Texas would be their home for the next 10 years. During the decade that followed, H Troop patrolled the Trans-Pecos region from the Guadalupe Mountains to the Rio Grande. Following many unknown trails, the Buffalo Soldiers mapped springs, fought bandits and scouted for Apache raiders. They remained in the field throughout the Victorio campaign, participating in the decisive battle at Rattlesnake Springs. Back on post, they performed the normal drill and fatigue duties, enlivened by such incidents as the obtaining of an illegal pass by the first sergeant to take a hunting trip with “two public women.” Under the leadership of Captain Louis Henry Carpenter and Captain Charles L. Cooper, the men of Company H left a record at Fort Davis exemplary of the service of veteran African-American troops on the frontier.

The Death of a President and the Destruction of the Mexican Federal Army, 1913-1914
Rubén Osorio

The murder of democratically elected Mexican President Francisco I. Madero on February 22, 1913, and the usurpation of executive power in the Mexican Republic by Gen. Victoriano Huerta initiated a political whirlwind. Most members of Mexico’s poor and middle classes, who had seen Madero ascend to power less than two years earlier, were appalled. In turn, many of them began to support reactionary movements against the Huerta government that were led by a plethora of provincial caudillos-men such as Francisco Villa, Pascual Orozco, and Emiliano Zapata. Mexico’s largest state, Chihuahua, nestled against the sparsely populated American states of Texas and New Mexico, was ideally situated to become a hotbed of revolt. Events which originated, and often culminated, in Chihuahua over the next two years transformed Mexico’s history.

Refugees or Prisoners of War: The Internment of a Mexican Federal Army after the Battle of Ojinaga, December 1913-January 1914
Gerald G. Raun

The entire United States-Mexico border region was impacted, on numerous occasions, by effects of the Mexican Revolution which raged from November 1910 until 1920. The Battle of Ojinaga in January 1914 was unique in that, not only did the civilian population seek safety in the United States, but an entire Mexican Federal Army crossed over and surrendered to United States troops. These soldiers, their families, and camp followers were interned at Fort Bliss, Texas, and Fort Wingate, New Mexico, for almost a year and proved to be an embarrassment to the United States.

Between December 28, 1913, and February 3, 1914, the American Red Cross played a major humanitarian role in southern Presidio County, Texas, by administering to the needs of wounded and sick Mexican soldiers. Largely unheralded, the Red Cross’ effort, which came as a result of combat between Federals and Constitutionalists under the command of Gen. Francisco Villa at Ojinaga, Chihuahua, saved lives and, quite possibly, prevented an outbreak of smallpox north of the Rio Grande.

Memories of a Revolution
Curtis Tunnell

An oral history conducted in 1995 with Sr. Manuel Arenivas Marrujo provides a personal perspective on the Mexican Revolution and the Battle of Ojinaga, and underscores the need for substantive oral history programs in the borderlands area.

The Rise and Decline of the Mexican Revolution in Múzquiz, Coahuila
Daniel R. Miller

The picturesque old Spanish municipality of Múzquiz in northern Coahuila became a hotbed of revolutionary activity during the 1910-1920 conflict which devastated Mexico. Forces that were pledged to five different revoltoso factions held the city at one time or another. In order to survive, the citizens were often forced to compromise their allegiances and/or their behavior to fit the current circumstances. The numerous changeovers wreaked havoc on the economic, political, and social well being of the entire municipality and left psychological scars that, even today, continue to haunt the region.

Descansos (makeshift shrines) are roadside markers dotting the landscape on highways and freeways from Latin America to the Texas-Mexico borderland. The custom has spread to other parts of the United States as well. Descansos are usually placed near the spot where someone was accidentally killed, and are erected as symbols of faith, love, and remembrance by family members and friends. The custom is ancient and can be traced to biblical times. In lands often hostile to open displays of religion, they are heartfelt testaments to faith and hope for eternal life. This article will describe the traditions associated with descansos and trace the history of this practice in the New World.