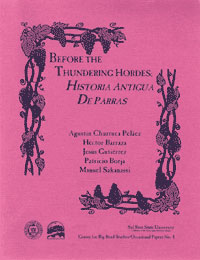 Parras de la Fuente, a city of over 40,000 people, is located in the lower portion of Coahuila state in northern México. On February 18, 1998, the proud and beautiful city of Parras celebrated the 400th year of its founding by Jesuit Father Juan Agustín Espinosa.

Until recently, the history of Parras was not well known. Father Agustín Churruca, a Catholic clergyman, saw the need to conduct investigations and compare his results with the conclusions of other scholars whose work, he felt, needed cohesion.

So in the 1980s Churruca combined his findings with those of Parrenses Héctor Barraza, Jesús Gutiérrez, Don Patricio Borja, and poet Manuel Sakanassi to form a body of work, the Historia Antigua de Parras. This compilation of investigations by Churruca was printed in Spanish in 1989.

However, the great interest in México/Texas borderlands and Spanish colonial-era research that has flourished in recent years gave rise to the need for an English edition of the work. Al Kinsall, a broadcast/print journalist and historian, agreed to translate the document into English.

Glenn Willeford, a historian, shortened the information into a relatively brief account, the results of which the reader now views. Retitled Before the Thundering Hordes: Antigua Historia de Parras Father Churruca’s book primarily seeks to reveal the early history of southwestern Coahuila in the Spanish colonial period. He emphasizes the Catholic Jesuit presence and influence in that region and concludes that the Jesuit confreres have been outdone in historical informes by the Franciscans, particularly in English language productions.

Scholars interested in Native American populations will find Churruca’s treatment of area populations interesting. The Tlaxcalan settlement, which occurred at Parras in the early seventeenth century, is also documented. The text examines the Spanish policy of latifundio (the granting of large estates) and the hacendados who, as time went on, came to control extensive land and water resources and in so doing expanded the peón classes and subjected them to virtual slavery.

Scholarly publications, such as this one, which come directly from Mexican-Spanish sources are important to the understanding of the rich history of México.