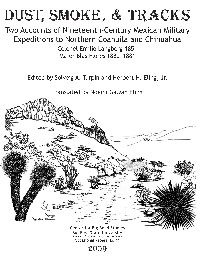 In 1851, Colonel Emilio Langberg, an expatriate Dane in the Mexican army, led an expedition from San Carlos to Monclova Viejo in order to measure distances between nodes on the Chihuahua-Coahuila trail and to assess the readiness of border defenses against intruders from the north. This first translation of his field itinerary includes many astute observations about the complex relationships between the Apaches, the Mexican and American military, border raiders and bounty hunters.

Thirty years later, Major Blas María Flores participated in two three-pronged military expeditions against the Apaches that he describes in a document he presented to the Mexican government as part of an overall plan for colonizing the northern desert. He prepared a detailed map of the area showing population centers, routes, and favored haunts of the Indians to support his argument for the strategic placement of military colonies to protect settlement and investment. His discussions of the various Indian groups compare linguistics, appearance, clothing, customs, and kinship, much of which strongly mirrors Langberg’s observations. Flores’s complete report is published here for the first time in Spanish as well as in English translation.

Almost 150 years later, over a period of three years, the Editors followed the routes laid out by Langberg and Flores, looking for traces of the expeditions and camping at the way points named in their texts. Their field observations were used to resolve discrepancies in translation and contributed to the extensive annotations.

Also included in this volume is a short description of a visit to Presidio San Vicente by Luis Alberto Guajardo in 1897 which provides previously unpublished information on features of this important fort which were subsequently totally destroyed.