The Center for Big Bend Studies at Sul Ross State University hosted “An Afternoon of Archaeology” at the MacGuire Ranch Sept. 12.

The event was a fundraiser to benefit the Center’s Trans-Pecos Archaeological Program (TAP). The program is a large-scale effort to compile the archaeology of Texas’ Trans-Pecos region, an area roughly the size of Maine. TAP is working to synthesize archaeological data from the region, return to more in-depth work at select sites, and incorporate the most recent innovations in archaeological techniques. 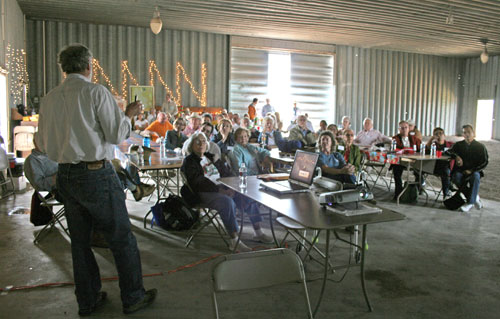 Over the last five years, the CBBS has identified over 2,500 archaeological sites and conducted large-scale excavations at more than a dozen of those sites.

The 65 attendees had planned to visit three archaeological sites on the ranch: the David Williams site, San Esteban Rockshelter, and the Chihuahuan Trail archaeological district. Because of inclement weather, they instead
attended presentations about each site. Robert Mallouf and Andy Cloud spoke about archaeology in the Trans-Pecos, and John Seebach, Roger Boren, and Reeda Peel discussed sites on the ranch and rock art in the region.

Presentations were followed by a social and dinner. After the meal, CBBS director Andy Cloud presented ranch owner Betty MacGuire of El Paso and Marfa with a plaque and lifetime CBBS membership for her outstanding support of archaeological discovery in the Big Bend.

The Center for Big Bend Studies plans to continue research at the MacGuire Ranch, specifically at the 7,000 year-old David Williams site, one of the oldest buried sites identified in the region.

TAP is possible because of the generosity of ranch owners, individual donors, and foundations. For more information, visit the website at cbbs.sulross.edu or call 8179.